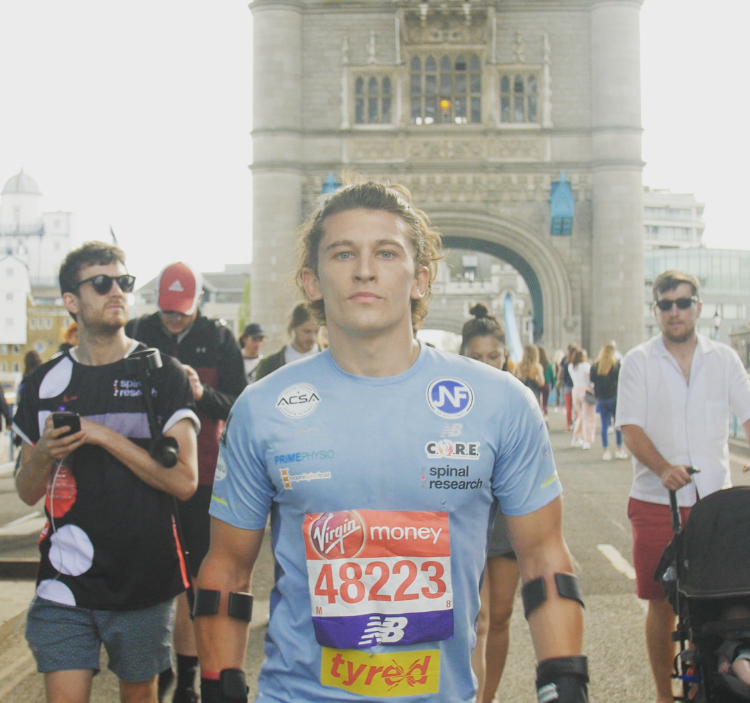 In September 2012, 22 year old, Zach was in the Bestival Coach Crash, which killed 3 people including his close friend Michael Molloy.  The crash happened as a result of a 20 year old second hand tyre which exploded on the A44 near Hindhead, Surrey.

Zach was thrown out of the windscreen as the coach crashed head first into a tree, he was not wearing a seatbelt at the time, a decision that was later proven in court to have saved his life. Zach had been sitting in an aisle seat on the front row, his friend Michael Molloy sat beside him directly behind the driver. Michael was killed, along with the driver and another friend Kerry-Lynne Ogden.

Zach shattered vertebrae in his spine which caused bone fragments to slice through his spinal cord. He was instantly paralysed as a result of the injury.

Following the accident Zach was repeatedly told by medical experts there was no chance of ever walking again. When Zach and his family fought the expert’s prognosis, they were shot down day after day, ultimately Zach’s head consultant vowed to him “If you walk again, I will eat my tie”.

Zach and his family visited over 10 different private physio clinics around the UK. When asked what his goal was, he would say “to get out of this wheelchair”, he was repeatedly laughed at and told to be realistic.  However, in August 2013, after reaching out to Claire Lomas – another spinal cord injury Ambassador, Zach and his family were directed to PrimePhysio in Cambridge. Both Zach and the NHS were adamant that this would be a waste of time.

After only one week of training, Zach was enlightened and shown a completely different angle and approach to the paralysis recovery process.  Zach’s muscles were electrically stimulated with a machine which cuts out the nerve pathway. Zach’s lower extremities were now contracting, increasing blood flow to the muscles and ultimately increasing the possibilities of neuroplasticity.

Zach was put through his paces and his fitness and physical capabilities really tested. He describes his first week at PrimePhysio as the first real workout he had ever done in 12 months since sustaining his injuries.

Two months later, a muscle in Zach’s Quadricep started to flicker. He persisted to find this contraction again, and with relentless training, determination and mental strength Zach began to re-establish more and more connections in his legs.

Leaving the final year of his Law Degree behind, Zach has trained relentlessly, as a full time job, ever since.  He has made progressions throughout every stage of the rehabilitation process from a wheelchair to becoming the first person in the world to walk the London Marathon after sustaining a severance of the spinal cord.

Zach sees and treats himself as a professional athlete, he is the Co-Founder of Liverpool’s ‘Aspire Combat Sports Academy’. Where the teams motto is ‘Better Never Stops’, a philosophy in which they believe Zach embodies more than anyone. He is also an international swimmer and ex British Champion, currently training with Ellie Simmonds CBE and coached by Billy Pye MBE, with aspirations of representing Team GB in the Paris 2024 Paralympics.

The first major distance Zach walked was 1 mile on a zimmer frame in Liverpool, in 59 minutes. After this his next goal was a 5k walk in Liverpool which he completed in 1 hour 36 minutes. Zach continued to set new goals, he completed a 10k event in Barcelona in 3 hours.  Next was the Liverpool Half Marathon in May 2017 which was achieved in 6 hours 4 minutes.

He then set his sights on making medical history with the London Marathon. In 2018 Zach achieved his goal, walking all 26.2 Miles (in 11 hours 45 minutes) in the world’s most iconic distance event.

Zach is a proud Ambassador of the Rooprai Spinal Trust (RST) ( www.rstrust.com ) and via his marathon campaign managed to raise over £150,000 to support others on their road to recovery, along with supporting the quest of finding a cure for paralysis with Spinal Research ( www.spinal-research.org ). “Our motto at the RST is ‘Making a Difference’ and that is the impact I’m trying to have. I want to play my part and believe I am sparking a movement in spinal cord injury recovery. I want to raise as much awareness as possible now for the possibilities of recovery.”

“Zach delivered a motivational assembly to year 11 students, he spoke exceptionally, in an age appropriate manner, and reacted to the needs of our students by relating his experiences to them.  The professionalism he demonstrated in both his appearance and his delivery were exemplary.  Zach followed the brief perfectly and worked with one of our teachers in preparation of his message.  Whilst Zach's story is heart wrenching, it is just as inspiring. His determination shone through and this resonated with our students.  We would highly recommend Zach working with any school or organisation to inspire a work ethic.”  The Academy of St Nicholas

JOURNEY FROM PARALYSIS TO MARATHONER – https://www.youtube.com/watch?v=OnsIiZjfYLw&amp=&t=5s