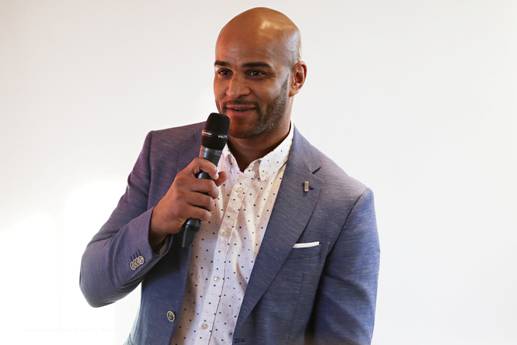 As former Premier League footballer and professional boxer, Leon McKenzie knows exactly what it takes to be successful in a competitive arena

Leon is now an ambassador for CALM speaking about mental health awareness, using his careers and experiences in sport to inspire and motivate

As former Premier League footballer and professional boxer, Leon McKenzie knows exactly what it takes to be successful in a competitive arena.  Playing, and scoring, in all 4 professional leagues in England, Leon went on to win two promotion medals during a career that saw him represent Crystal Palace, Peterborough United, Norwich City, Coventry City, Charlton Athletic and Northampton Town.  His goal scoring achievements saw him entered into the Hall of Fame for Peterborough United.

With a highly credible football career playing at a top level for a number of years, Leon has had many trials and tribulations during and after his football career.  Even during the pinnacle of his football career, Leon suffered from depression, which was compounded by not dealing with personal circumstances and ultimately not dealing with his football career coming to an end.  After a career-threatening injury Leon ended up at Charlton Athletic, and during this time he suffered badly from depression. Later in life Leon revealed that things got so bad he tried to end it all by taking pills and attempting to take his own life.  In 2012 things continued to get worse for Leon, after he served time in prison for driving offences.

Despite all of this, Leon didn’t crumble, he kept fighting back and wrote his autobiography “My Fight With Life,” which was published in 2012, and then Leon then went on to achieve again in another sport – professional boxing.  At 35 years old Leon jumped into the ring and once again was successful in competitive sport, showing that with persistence, hard work and self-belief not even age can stop you from achieving your goals even after being in such a dark place in life.

Leon is now an ambassador for CALM speaking about mental health awareness, using his careers and experiences in sport to inspire and motivate audiences across the UK. He also is a shareholder for LAPS (Life After Professional Sport) an organisation which aims to help athletes prepare for life outside of sport once they finish their careers.

Leon has a fantastic documentary film called Ten Count, which is set to be released very soon. This film documents Leon’s journey, lighting a torch on mental health issues within sport. Leon Interviews many athletes from across the UK and USA including Dwayne Johnson aka The Rock who is presently the biggest Hollywood star in the world.

'I Wanted To Kill Myself': How Leon McKenzie Tackled Suicide