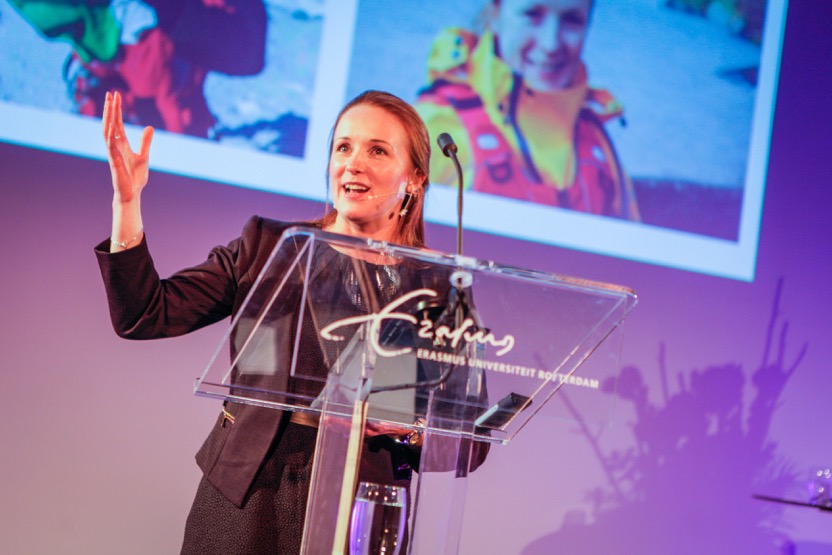 Tori James, at the age of 25, became the first Welsh woman to climb Mount Everest. Tori stars in the BBC documentary ‘On Top of the World’ which was produced about her expedition and she is also the author of ‘Peak Performance’ which describes her record- breaking climb to the summit.

She was born in Pembrokeshire and grew up on a farm where she claims to have gathered much of her toughness for venturing outside in all weather. After gaining a degree in Geography from Royal Holloway University of London, Tori secured her dream first job working for British Exploring, a charity founded by a member of Scott’s Antarctic expedition and based at the Royal Geographical Society in London.

In 2005 she was a member of the Pink Lady PoleCats, the first all-female team to complete The Polar Challenge, a grueling 360 mile race to the Magnetic North Pole. In 2010 Tori cycled the length of New Zealand, a total of 2400km, unsupported from north to south.

In June 2014 Tori was part of the Beeline Britain team who became the first to travel in a straight line from Land’s End to John O’Groats in aid of BLESMA (the British Limbless Ex- Servicemen’s Association). Their 1,100km journey involved sea kayaking, road cycling, mountain biking and hiking and is documented in the award-winning film “As The Crow Flies”. The team set a record for the longest open sea kayak crossing in UK waters kayaking non-stop for 200km from Land’s End to Pembrokeshire. www.beelinebritain.com

Tori lives in Cardiff and works across Wales and internationally. She is a motivational speaker and consultant delivering leadership training, team and youth development projects. Tori has led teams in both corporate and charitable organisations in sectors including aviation, entrepreneurship and sport.

Tori is the President of Girlguiding Cymru, a Fellow of British Exploring and an ambassador for the Duke of Edinburgh’s Award in Wales. In November 2014 Tori was awarded a ‘Points of Light’ Award by the Prime Minister in recognition of outstanding volunteering over the last 10 years.

“Tori speaks of her own courage, joie de vivre, and sheer grit and determination in a way that is inspiring, and utterly compelling to listen to. She presents with a sincerity that can only come from a huge sense of personal achievement, and her passionate delivery taps into something in all of us”    Breakthrough Breast Cancer

“Just to say that I was doing some writing yesterday with Y3 & 4s about ‘Daydreaming’ and was amazed how many of them wrote that you had inspired them to aspire to do things like climb Mt.Everest one day! What an inspiration you are – it is so easy for a wizened old pro like me to forget sometimes just what an impact an inspirational speaker can have on the lives of young people”   Goodrich Primary School, Herefordshire

“Tori was the perfect speaker – inspirational, yes – but so natural that she made it all seem achievable – I thought her message was brilliantly delivered”  Monmouth Haberdashers School for Girls, Sports Awards Dinner

“Tori’s presentation was motivating and inspirational. The lessons about personal challenge, seeing things through, staying motivated were all spot on…like consulting life but from an unexpected perspective!”  Capgemini