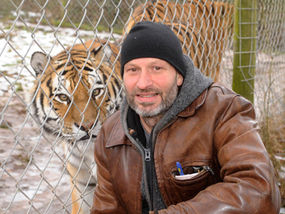 Author of the book “We bought a zoo” based on his true-life story, and immortalised by the Hollywood film of the same name, which was directed by Cameron Crowe and starred Matt Damon and Scarlett Johansson.

Benjamin Mee was a journalist, well known for writing a humorous DIY column for the Guardian. With his wife Katherine and two children he moved to France to live the simple life whilst writing a book on the Evolution of Humour in Man and Animals.

With no experience of running a zoo, Ben and his extended family decided to purchase the dilapidated Dartmoor Zoological Park in 2006 with just 10 days’ running costs in the bank to see them through. Tragically, Ben’s wife Katherine passed away the following Easter making the possibility of opening the zoo seem even less likely.

Amazingly the zoo did open for the summer of 2007 and the BBC made a four part documentary of their adventure into the unknown, called ‘Ben’s Zoo’. His book ‘We Bought A Zoo’ is an international bestseller, which has been printed in 23 countries. Small wonder then that Hollywood came calling.

The US blockbuster movie, directed by Cameron Crowe and staring Matt Damon and Scarlett Johansson was released in the UK at the end of March 2012.

Since then the highs and lows continued, before the Zoo became a charity in 2014 and Ben continues his dedication to the cause as CEO.

Ben is available for:

Ben tailors his talks to the requirements of the individual clients. His talks focus on the themes of:

Let Benjamin introduce you to the world of novice zoo keeping; to Sovereign the scheming, escaping Jaguar; to agitated porcupines and over 200 other animals including 5 tigers, 3 lions, 3 bears and 7 wolves. Hear what it’s like to have a movie made about you; being told that Matt Damon is going to play you; about visiting the set, appearing in a cameo role, and walking the red carpet.

Aside from being highly entertaining and amusing, Benjamin Mee’s inspirational story is one of triumph over tragedy and the passion and perseverance it takes to succeed. He reminds us of the importance of striving to meet our goals–even in the face of adversity. Ben has spoken extensively throughout the US and is now available for speaking engagements in the UK and Europe.

“ Benjamin Mee has a wonderfully unique story to tell. An uplifting and inspiring story that resonates with everyone; the need to carry on despite adversity, to persevere against the odds, and to create a home for one’s family. Combined with Ben’s unwavering resolve and clear focus the learning that he weaves into his fascinating anecdotes of wolves and “big cats” can be readily applied to the corporate world of today. Ben is a charismatic and compelling storyteller and a genuine pleasure to listen to.”
Deputy CEO – Capita plc

“Benjamin was a fantastic speaker – utterly compelling and totally engaging with a story that was inspiring, humbling, humorous and tear-jerking all at the same time. I think we all now want to buy a zoo or to live on his!”
HSS Hire