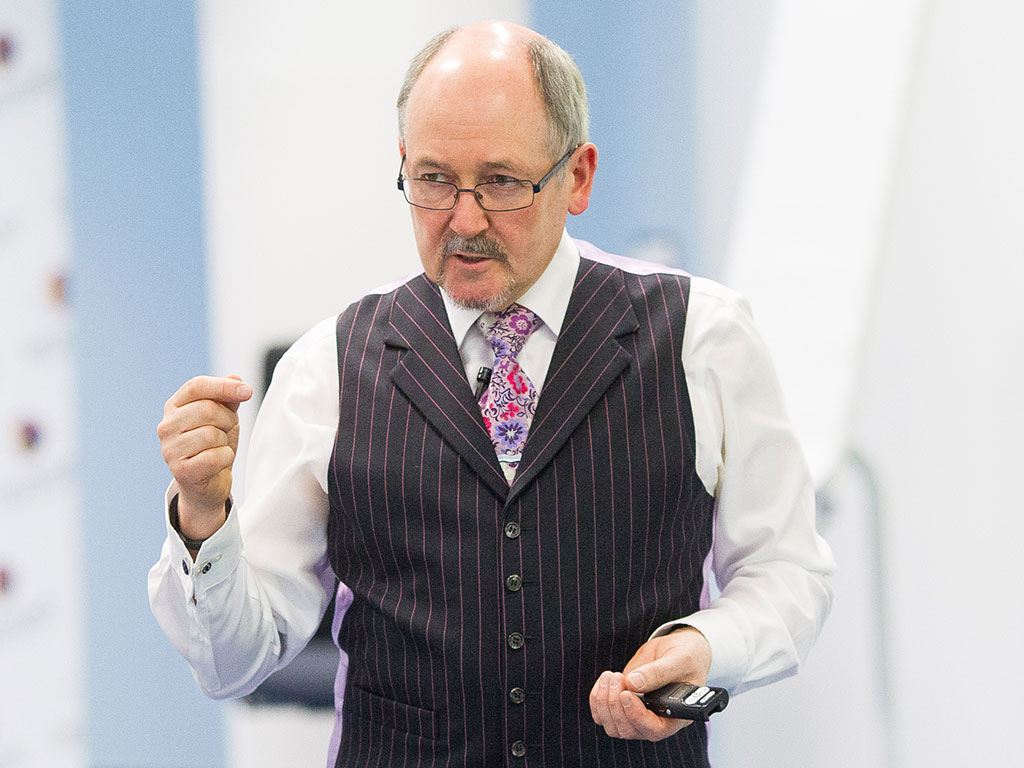 Stephen is rated as one of the top 3 lecturers at Europe’s top MBA Business Schools – Cranfield.

Stephen is rated as one of the top 3 lecturers at Europe’s top MBA Business Schools – Cranfield. He has a reputation of taking complex management concepts such as Project, Programme and Crisis Management and being able to distil them down, into highly informative and fun lectures – often using “storytelling” techniques. His attitude is “if you haven’t done it – you shouldn’t be teaching it!”

Unusually, for an academic, he has actually has spent most of his working life in real business and still runs his own, highly successful, Project Management Company (his client list now reads like the FTSE/Dow top 100!)

Stephen is an unusual blend of Academic, Businessman and Teller of Tales. He has taught in UK, US Holland, Germany, France, Portugal, Singapore, Hong Kong and Australia and has appeared on National Radio and TV. Some of his “Stories”

January 28th 1986 – the space shuttle Challenger explodes just one minute after launch. As the world looked on horrified, few realised that this was an inevitable accident that had been predicted by the designers for years. Indeed, the day before the key engineers believed that there was “essentially a 100% probability of disaster”.

After the accident NASA realised that they had pushed the boundaries too far and embarked upon major management reforms. Sadly the reforms made the launches look almost too safe and as a result over the subsequent years standards and relationships slipped once more.

Then in Feb 2003 – the Space Shuttle Colombia burns up on re-entry and the entire crew perish. The chilling fact was that this was a management repeat of the Challenger disaster – NASA had not truly learned the lessons of the past!

BRITISH CLIPPERS• Plan then do• Stakeholder Management• Ideas to reality• Enthusiasm vs. Planning

This is a cautionary tale of how two swashbuckling heroes – Richard Branson and Chay Blyth, learnt the difference between Project Management and Enthusiasm Management. The idea was brilliant – the Americans love everything British and they love Tall Ships – why not combine the two and create a floating Harrods and take it over to the U.S! The concept was brilliant, the enthusiasm was overwhelming, the teamwork was magnificent, the outsourcing high– however, the planning was negligible. A lovely tale of how even good ideas can fail if you call in the Project Manager (Stephen) too late!

Once upon a time there was an oil rig called Ali Baba. It was built in Norway in 1976 and for many years it plied it’s ordinary trade searching for oil across the world. However in 1989, this rig became the focus of one of the North Sea’s most extraordinary stories – a story of how an ex-diver dreamed of developing his own oilfield. The cast of characters in this incredible but true story include the British Government, Davy International, Trafalgar House, Hong Kong Land, Kvaerner and the Finish State Oil company. The story charts the progress of this incredible dream from its humble beginnings, to its spectacular realisation and it’s final degeneration into a commercial and contractual nightmare.

A tale of warning and a tale of doom – the tale of a rig too far.

1066 – THE BATTLE OF HASTINGS• Leadership styles• Risk appetite• Building Alliances• Project vs. Business• Learning from the past• Management of luck!

Almost a thousand years have passed since this battle changed the course of England’s history. Recent research has uncovered a wealth of new data which shows that the battle was won not by the best warrior or even the best leader but rather by the best project manager!

This lively and entertaining case study shows not only how a project manager from 1066 can still teach present day managers a few tricks, but also raises the topical subject of how “company cultures” often find it difficult to manage their  project managers after the project is over!

Change is risk – but it is also opportunity. Project and Programme management are the conventional tools for managing risk, but recent cutting edge research at one of the UKs top Business Schools has identified that these conventional methods could be missing more than half the picture in the dynamic and complex markets that we currently navigate.

Using the analogy of flying, Stephen leads this fast moving and fun session looking at how projects and programmes can be managed in different ways and so improve risk management approaches. From flying solo to orchestrating the Battle of Britain Stephen shows organizations how to get off the ground and lose their fear of flying with projects and programmes. This ground breaking lecture (recently showcased by the APM and PMI) changes perceptions of risk and shows how much can be achieved by the few for the advantage of so many!

“Stephen’s presentation style was excellent and certainly worked well with our audience.  100% of delegates either said that Stephen’s NASA presentation was either what surprised them the most (in a positive sense) or what worked best for the day.
The impact on the audience was significant and really made people both realise that change is possible but also understand the impact if we don’t change.”  Heathrow Airport

Illustrated so many important things about leadership, strategy, integrity and where business goes wrong. Also, he is a very engaging speaker.

I loved the talk by Professor Steven Carver, he was extremely interesting and kept the audience engaged the whole way through his section. I feel privileged to have been a part of such an experience.