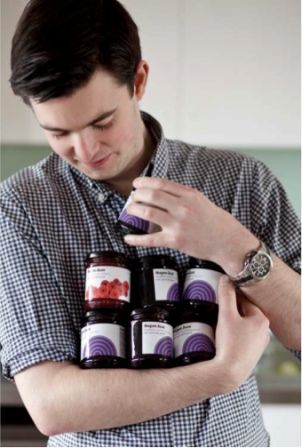 Fraser Doherty, now 24 set up SuperJam at the age of 14, using his Grandmother’s secret jam recipes.  Fraser became the youngest ever supplier to a major supermarket chain when Waitrose launched the range in March 2007. Awarded an MBE in June 2014

Over 500 speeches in 26 countries around the world!

Regarded as “One of the UK’s leading motivational speakers”, Fraser Doherty started his incredible business career at the age of just fourteen.  After being taught how to make jam in his Grandmother’s kitchen in Scotland, he came up with a way of making jam 100% from fruit.  At sixteen, he presented his brand, SuperJam, to Waitrose and went on to become the youngest ever supplier to a major supermarket.

SuperJam has since grown into a company that has sold many millions of jars through thousands of supermarkets around the world.  As well as being a commercial success, the business has invested in successful charitable projects – running hundreds of free tea parties for the elderly in Europe, Korea and Australia and setting up community beehives in the UK and Korea.

SuperJam is exhibited in the National Museum of Scotland as an ‘Iconic Scottish Brand’, has won over 20 innovation awards and has been the subject of several TV documentaries.  Fraser Doherty has been commended by the Prime Minister at Downing Street, by HRH Prince Charles and was recently awarded a medal (MBE) “for services to business” by The Queen.  He has shared his incredible story at more than 600 conferences in 27 countries around the world, as well as in his best-selling book SuperBusiness – published in UK, US, Australia, Korea and Japan.

Fraser travels 365 days a year, living nowhere permanently and without a fixed office.  He has visited over 50 countries.  He runs his company remotely – a true example of a pioneer of virtual working and cloud solutions.  He is one of the UK’s youngest MBA graduates and regularly lectures in Entrepreneurship at universities around the world, including London Metropolitan where he is their youngest ever Visiting Professor.

– How starting a business can change your life.

– How technology makes it possible to work remotely with teams around the world.

– How to build a brand that your employees and customers love.

– How the internet can help a startup grow rapidly, even in a traditional industry.

– The importance of CSR and creating a business that has meaning.

– What ‘Generation Y’ expect from the companies they work with and do business with.

“He connected well with the audience and struck the right note of informality and ‘telling a story’, Very positive”  Uxbridge College

“Fraser is a compelling speaker and exciting entrepreneur.” Director – Return on Marketing Investment

“I recently attended a talk by Fraser Doherty describing his experiences as an entrepreneur creating the SuperJam brand. I found Fraser’s story (and indeed Fraser himself) to be really inspiring. Fraser has taken a clear, simple idea and together with great passion and determination has created something really distinctive in the market place. He didn’t have huge resources to get his idea off the ground – but he did have a persuasive selling story to bring others along on the journey with him. Just as importantly, he hasn’t forgotten where it all started and has made an ongoing commitment to give something back to the community. Altogether a very inspiring story….” Vice President Marketing & Innovation

“I never thought I could learn so much from someone so young.” Managing Director,

“Fraser is an incredibly grounded young man, given what he has achieved so far. His presentation style is quite unique. Whilst he may not have the gravitas and stage presence of other entrepreneurs, Fraser is truly engaging as he wins you over with his charming and passionate portrayal of his story. His soft-spoken and modest manner completely disarm you and make you feel that you’ve known him for ages. He’s a pleasure to listen to and proof that you can be both a good person and a good businessman.” Brand Manager