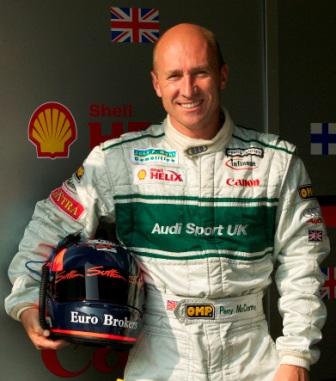 Perry McCarthy is quite simply unique. He combines his experience as a Formula One driver with becoming “The Original Stig” from Top Gear, to delight audiences with either a captivating motivational address or a hilarious after dinner speech.

In the world of International Motor Racing, Perry McCarthy is known for his speed and humour. But he is also famous for his determination, opportunism and deal making abilities. His motto is ‘Whatever it takes’.

Such was his intent that Perry worked on North Sea Oil Rigs for two years to fund the start of his journey to Grand Prix. Then as his progression upward through the ranks of international motor sport demanded more finance, instead of saying this is impossible he relentlessly sought the necessary sponsorship to make his dream of becoming a Grand Prix driver come true. There were many difficult times for Perry and his young family but he would not give up, either on or off the track, always finding a way to make things happen.

However Perry is most well-known as the original ‘Stig’ from BBC’s Top Gear.  The Stig has constantly remained one of Top Gear’s most iconic features, and it’s largely down to the aura of mystery that the man in the white suit possesses together with some incredible driving skills.

Perry is in high demand to give after dinner, business and motivational speeches. He links his experience and passionate attitude, along with his ‘behind the scenes’ knowledge of the Formula One world, to provide a highly entertaining, inspirational and insightful platform tailored to support the clients’ key event messages.   Perry is on-message but provides plenty of opportunities to laugh in-between the key points.

“I have constant admiration how he turns a no hope situation into some form of triumph”  Damon Hill, 1996 World Champion Formula One Driver

“Thanks Perry: like all good men, you rose to the occasion on the night! A spot-on speech, beautifully crafted with just the right amount of humour. Not only did an international audience welcome having you there as 'anchor-man', but our client appreciated the way you understood the message they wanted to deliver, and integrated this with top audience entertainment. And from our point of view, you were a (diamond) pleasure to work with.”  Director of RSM ref Automobili Lamborghini event