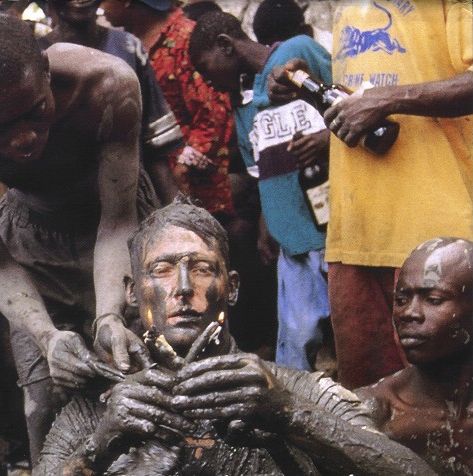 Often described as “television’s most fearless man”, Benedict is an extremely popular after-dinner and motivational speaker. His exceptional talent for applying his pioneering expeditions to the corporate ‘jungle’ ensures an enthralling, entertaining and inspirational experience for any size of audience.

A TV Presenter, Explorer & Author often described as “television’s most fearless man”, Benedict Allen is an extremely popular after-dinner and motivational speaker. His exceptional talent for applying his pioneering expeditions to the corporate ‘jungle’ ensures an enthralling, entertaining and inspirational experience for any size of audience.

Benedict is best known for making television history by being the first to record his arduous and treacherous exploits without a TV-crew. By single-handedly capturing his experiences on film he has created groundbreaking, spontaneous & authentic programming. His six major series for the BBC include Skeleton Coast, Edge of Blue Heaven and Ice Dogs. This year Benedict has presented Travellers’ Century and is an expert contributor for Extreme Dreams, as well as presenting the huge Channel 5 series Unbreakable. He has published ten books including The Faber Book of Exploration and Into the Abyss.

Unlike most adventurers today, Benedict does not carry GPS, phone or other types of backup, but survives by drawing on the skills he has learnt from indigenous peoples and pushing human endurance to its limit. He is the only non-tribesman to have undergone the harshest male initiation ceremony in the world (to make him ‘a man as strong as a crocodile’) in which he was beaten for six weeks and left permanently scarred on his chest and back. He is the only person to have crossed the Amazon Basin, and to have trained a dog team to take them 1000 miles across Siberia during the worst winter in living memory. He has been shot at, had to stitch-up his own wounds (without an anaesthetic!), has been left by guides to die and has even had to eat his own dog to stay alive.

Benedict inspires and invigorates all types of business audiences by skilfully translating his ‘against the odds’ survival for the global corporate ‘jungle’. His ability to successfully integrate himself into exotic and alien cultures motivates those in commercial cultures and provides the impetus to achieve targets. His audiences in venues as diverse as Geneva, Nice, New Jersey and London include IBM, The Prudential Building Society, GlaxoSmithKline, The Halifax, M&G Investment, The Royal Bank of Scotland, Bank of Scotland, HSBC, PricewaterhouseCoopers, Teva Pharmaceuticals, TransFin, Unum Provident, GLP Care, Proctor & Gamble, Investec, BT, Aon, Deutsche Bank and Goldman Sachs.

'Meaningful and positive, something to take away and think about…excellent; everyone thoroughly enjoyed it, and it tied in nicely to the messages that we wanted to get across to our sales team.'
Airwide Solutions

''A captivating motivational talk; we received very encouraging feedback from both CBRE representatives and guests alike – all 120 copies of his book were snapped up…'
CB Richard Ellis,

“The points you made on teamwork and the “power” of the individual, plus your enthusiasm, gave a perfect motivation and start to our conference.”
Sericol Ltd.

We were enthralled by Benedict's keynote presentation at our conference… Benedict scored by far the highest marks of all the presenters. He was described as “inspirational,” “an excellent spirit lifter,” and just “superb”.
Progress Software Ltd

“Your amazing Amazon adventures kept our audience spellbound. Although I am sure most would find the prospect of such a journey daunting, they will never-the-less have taken on board your lesson on the ability of men and women to overcome extreme adversity and succeed in the end.”
IBM

“Your speech was just what was needed at the end of a long day. Amusing and truly extraordinary! Everyone was recounting your stories afterwards. You have a very unusual – and special – life.”
London Business School