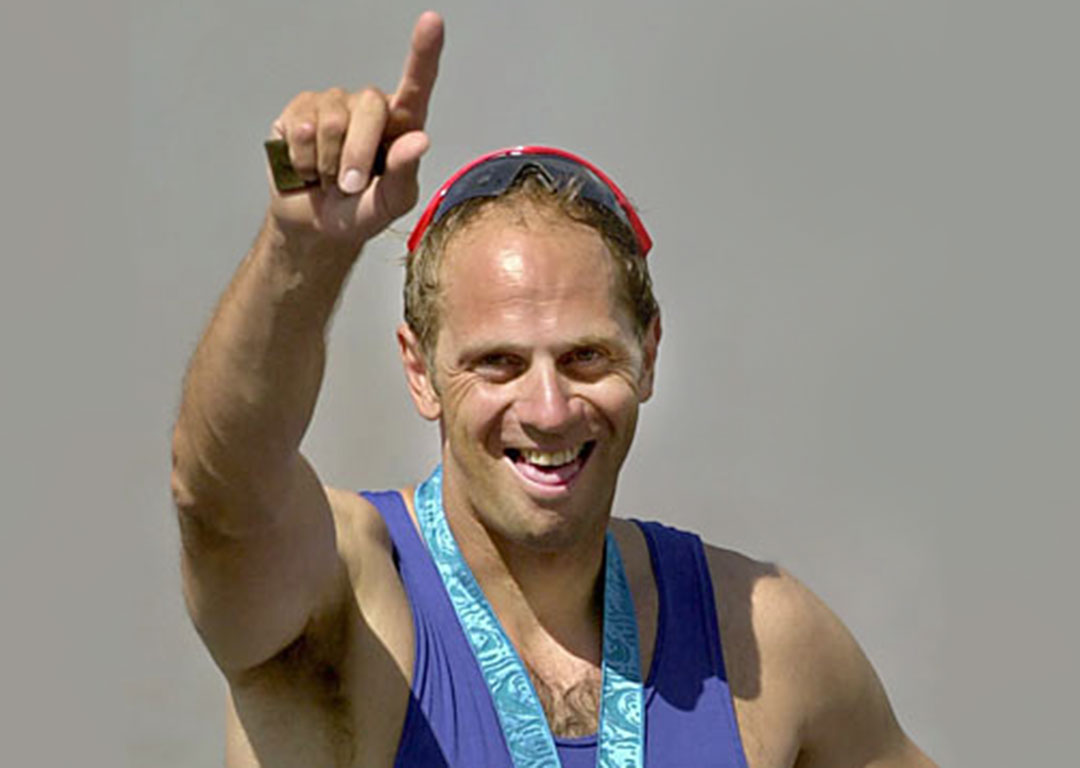 The nation watched with bated breath as Steven Redgrave won a fifth Olympic gold medal at the Millennium games in Sydney. Knighted for his incredible achievements, Sir Steven remains sought after as a public speaker. A living legend and a sporting hero with an amazing story to tell, he is also renown for winning over his audience with his modest, friendly and informal style.

Having won his fifth Gold medal at the Millennium Games in Sydney, Steve is without doubt the greatest Olympian Britain has ever produced. In addition to his Olympic successes and following two unbeaten seasons in 1993 and 1994, Steve (and his partner Matthew Pinsent) won his sixth World Championship Gold in Finland.

His previous World Championship Gold’s were in 1896,1987,1991, 1993 and 1994. He has won many other honours in the sport over the past fifteen years including the Henley Royal Regatta Diamond Sculls several times and the Silver Goblets a record seven times. In 1986 Steve became a Triple Commonwealth Gold Medallist at Edinburgh, winning the Single Scull, Coxless Pairs and Coxed Four.

His other sporting interest include golf and winter sports and during the 1989/90 season, he was a member of the British Bobsleigh Team. Together with Matthew Pinsent, Steve is the holder of the World Record in coxless pairs set in Lucerne in 1994 and the Olympic Record, set in Barcelona in 1992. In 1986, Steve was awarded the MBE in the New Year’s Honours List and the CBE in the New Year’s Honours List of 1997. He was also awarded an Honorary Degree by the University of Durham in December 1996.

Now that he has finally retired, Steve has made many appearances on television and for commercial companies, meeting clients at lunches, receptions and exhibitions. He is also proving very poplar indeed at after-dinner talks and conference motivational speeches, injecting his own style of friendly informality and humour to the occasion.

Tesco were delighted that Sir Steve Redgrave could make a unique contribution as a speaker at a recent launch. As our foremost Olympian he brings a reputation that is both inspiring and motivational. Sir Steve demonstrated a level of approachability and openness that helped make the event truly memorable.       Tesco PLC

I just wanted to thank Sir Steve for the excellent speech he gave to our meeting of senior diabetes specialists on 9th May 2005. His talk was interesting, relevant and amusing.   Sir Steve is a true professional and a very nice man – I hope we have the chance to work with him again.     Alma Place Ltd

Steve was fantastic! He went down an absolute storm – he was the highlight of the conference. His speech was very appropriate to the event and he stayed around and took photos with the attendees. He was a really nice guy and very easy to work with.     Mars Inc

Your status in sport and your achievements to date made you the correct choice to join us on this occasion, but your personality, grace and good manners demonstrated that you are a true ambassador for sport and role model for our youth and you would be welcome back at any time.
Riffa Views

Gleeds was delighted when Sir Steve joined as Brand Ambassador in 2005, helping to motivate staff and raise our profile in the property and construction industry. Sir Steve assists with many aspects of Gleeds' work – from hosting networking events, to after-dinner speaking, to motivational sessions and international appearances – and is admired for his determination and professional position on the world-class stage. His inspiration and advice is welcomed by all, be it at a business lunch, supporting youth in education, out on the golf course or encouraging our staff in rowing competitions! We are proud to have him on board as an iconic figure and national role model and look forward to many more exciting and successful years of working together.     Gleeds

Having Steve attend our final review of a year, during which our 'Going for Gold' theme had been prominent, was a fitting way to close a busy 12 months for us.   The surprise element worked well for our team – the impact of welcoming such a high-profile 'golden' personality into our workplace was extremely positive. Steve's presentation was an ideal blend of personal experience matched with reflections on our business environment. The parallels that exist between the challenges faced by an Olympic gold-medallist and those of a Technology function in a Business Information company are remarkable! The effect of having Steve spend time with us, sharing his story and reliving his experiences, was inspirational and motivational. Steve engaged our audience with his warm style and winning charisma and it was great that he was able to spend time informally with our team members after the presentation. We appreciated the generosity with his time and his willingness to chat to people and join in photos.    We thank Steve for bringing his Olympic gold medal collection in to share amongst our audience – we are hopeful that the 'Midas touch' will linger into 2008 to give us another positive year!            D&B

Many, many thanks for a wonderful sppech at our Conference dinner on Thursday. You had obviously worked hard to align your words with the theme of our conference. We really appreciate the care and attention you showed to us.   You had a remarkable effect on those present. Many, many people wrote that they valued your presentation and for me, personally, it was a highlight and made the hairs on my neck stand up at various points during your talk. It was truly inspirational.    For our award winners to be presented with their trophies by our greatest Olympian was remarkable and memorable. One comment from one of winners best sums up the impact:

“…Sir Steve Redgrave is simply superb and his being there ensured an already fabulous evening became sublime. Simply to say a huge thank you – definitely in my memory bank for when I am old. Wonderful.”               The Oval Group