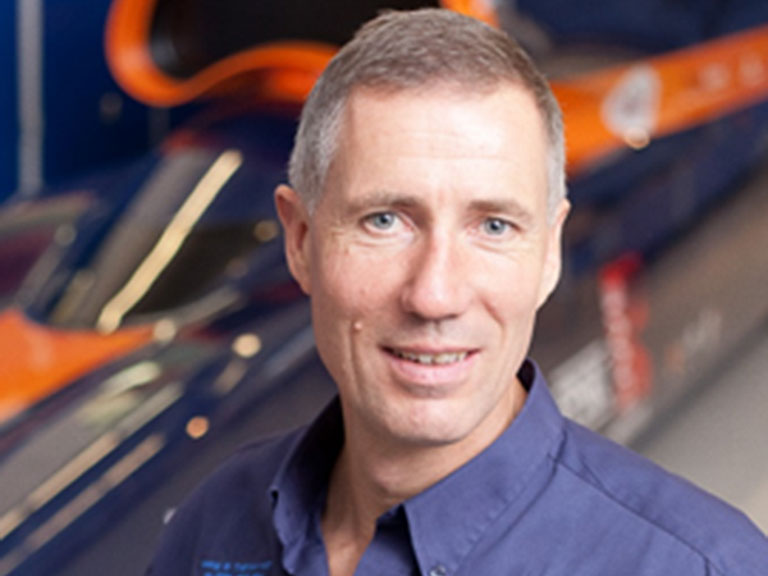 Wing Commander Andy Green, ‘The Fastest man on Earth’, is a serving Royal Air Force Fighter Pilot.Driving Richard Noble’s Thrust SSC (SuperSonic Car) in 1997, Andy and the team set the world’s first and only supersonic land speed record at an astonishing 763 mph, driving literally ‘faster than a speeding bullet’.ﾠ After setting the outright Land Speed Record in 1997, Andy went on to drive the JCB DIESELMAX car in 2006, setting a record of 350 mph for the world’s fastest diesel car ‘ powered by JCB digger engines.

Andy is now involved in perhaps the ultimate Land Speed Record challenge.ﾠ He is the driver for the new Bloodhound SSC, designed to reach an astonishing 1000 mph.ﾠ Using his previous Record-breaking experience, and drawing on his first-class Mathematics degree from Oxford and his experience as a Fighter Pilot, Andy is a central member of the design team for this remarkable jet- and rocket-powered Car.

This Project is linked through a major education programme into schools across the UK and to students around the world.ﾠ The Project aims to inspire the next generation of young engineers and scientists, while setting the most remarkable Land Speed Record of all time ‘ 1000 mph.