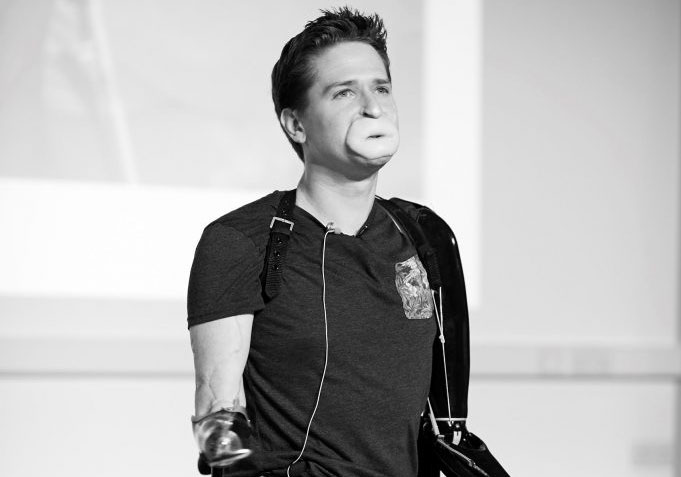 Aged 34 Alex thought he had a ‘man flu’ but collapsed and was rushed to hospital, he was given just hours to live and a 3% chance of survival.

Aged 34 Alex thought he had a ‘man flu’ but collapsed and was rushed to hospital, he was given just hours to live and a 3% chance of survival.ﾠ Alex had contracted Strep, followed by Septicaemia which led to him having all four limbs amputated and facial reconstruction.ﾠ 99% of human beings would not have endured this rampant infection.ﾠ As well as losing his limbs, Alex also lost his lips and nose. Surgeons have since grafted skin from his shoulder into lips leaving him, he jokes, looking like a Simpsons character and with a nose that constantly runs.  In a few weeks Alex went from being the owner of a pub, to becoming critically ill and a quadruple amputee.ﾠ Instead of spiralling into despair and retreating into a state of self pity,  Alex took a truly inspirational approach to what happened to him.ﾠ The story of his positivity and adjustment to a new life is truly remarkable and was the subject of a recent Channel 4 documentary “The Extraordinary case of Alex Lewis”.ﾠ Alex’s progress and exploits have been well documented in the media.ﾠ Most recently Alex took on an amazing challenge to kayak 130 miles around Greenland.

The positivity 34-year-old Lewis, has found since his life changing illness has been remarkable for those close to him.ﾠ Many would find it hard to believe, but he says that great things have come of it. Alex says ‘ it’s made me think differently about being a dad, a partner, a human being.’

He set up a Trust to raise funds for his rehabilitation which has given him a huge impetus to help others including participating in University research projects developing new technology for amputees. Despite this positive attitude, he can’t do a lot of the things he once loved, like cooking , playing golf and walking his dog.

Alex delivers a motivational talk entitledﾠ ‘A Minor Setback’ to organisations conferences and educational institutions. His aim is to inspire others to overcome adversity and take on new challenges in life.

Amazingly, Alex still describes the past years as the best he’s ever had.

At any of the events that I have attended with Alex, his positivity has lit up the room.ﾠ Alex's motivational talks are a shining example to all of us that there are people much worse off than ourselves, facing day to day struggles, and of which the vast majority of people would have given up a long time ago.ﾠ His positivity in the face of sheer adversity benefits all who meet him, and we will be utilising his services in the future to demonstrate what can be achieved with such a strong motivational attitude to life.” Managing Director TSI

“Dear Alex, on behalf of Medtronic, I would like extend our thanks for taking part in Medtronic LIVE and sharing your moving story with the company. Your talk was laid bare, shocking, emotional and inspirational to everyone in that room. I'm not sure there are many of my colleagues who would accept the challenge of a tandem parachute jump or the kayaking with such a fearless attitude. I have done a parachute jump and believe me, I was FAR from fearless when it came to leaping out of that plane. Everyone in that room was both motivated and humbled by what you and your family have been through. It was a pleasure to meet you and we wish you all the best for the future.” Organiser