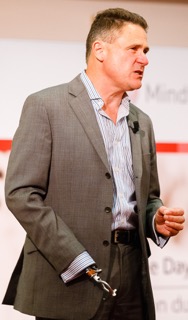 Chris Moon is a motivator. He survived abduction by the Cambodian Khmer Rouge and has never let a horrific landmine accident stop him from achieving his goals: he has completed arduous marathons in tricky mountainous or hostile desert locations. Audiences are moved by accounts of his immense personal courage and alert to his messages about change management, leadership and defeating limitations.

Chris Moon exists to help people do what they do better, drawing on his unique experiences to illustrate principles people can use in their daily lives.

He’s one of the most fortunate people to be alive you’re likely to meet and should be dead many times over. He’s a former British Officer who left the Army to work for a charity clearing landmines and unexploded ordnance. He’s one of the few Westerners to survive being taken prisoner in Cambodia by the Khmer Rouge (one of the most ruthless terror groups in history). He negotiated his own release and that of two colleagues. Two years later, when working in a remote part of Mozambique, he was blown up walking in a supposedly cleared area losing his lower right arm and leg. To survive he treated himself in the minefield. His doctors said they’d never seen anyone survive with such a small amount of blood.

Less than a year after leaving hospital he successfully completed the London Marathon and became the world’s first amputee ultra-distance runner when he completed the gruelling Marathon Des Sables. Since then he’s completed many of the toughest ultra-distance races in the world, including the Badwater 135 mile Death Valley run in the hottest place on earth.

When it comes to challenging the concept of limitation, adapting to change and overcoming adversity Chris walks the talk. He has a proven track record of delivering high impact presentations, helping to change behaviours and improve performance. As a speaker Chris delivers passion, humour and inspiration. He shares experience on the balance of life and death and the limit of human endurance, which strip away any pretence we have as human beings to allow us to use his principles to do what we do better. These have academic rigour behind them from his Masters in human behaviour and work with psychologists and psychiatrists. Chris Moon is a truly international speaker who has worked with diverse cultures, businesses and governments around the globe.

“It truly was inspirational to hear your story and own versions of positivity and dealing with difficulty.  Your presentation fitted extremely well with our theme of Winning Mentality, leaving our people feeling inspired and motivated – I couldn’t have asked for a better a response.” Henley Investments

“The messages were spot on and really resonated with our team.  It certainly echoed the messages we were trying to convey. I would have no hesitation in recommending Chris to others as a great motivational speaker.” Direct Line Group

“Many thanks for another stellar performance.  The teams haven’t stopped talking about it and the feedback we have received has been tremendous. It really hit the mark leaving everyone motivated and ready to go the extra mile. Thanks again for a truly brilliant day.” British Gas Sales

“Thank you for the time and effort you personally put into our Health & Safety event. We’ve received excellent feedback about your speech and it has left our team with plenty of food for thought.”  Skanska UK

“Thank you very much for your most positive and inspirational contribution towards our Health & Safety Conference. Feedback from the team has commented on the inspiration you have given in encouraging them to reconnect with best practice in Health & Safety. “ Carter Construction

“Thank you for delivering such a brilliant speech. You absolutely hit the spot in terms of both entertaining the room and promoting our safety theme. “ Institute of Gas Engineers 150th Anniversary Dinner

“Thank you very much for presenting at our International Day of Persons with Disabilities event. Your personal contribution ensured the event was a huge success and that feedback received has been extremely positive.” Staff Disability Network, City of London

“Chris inspired our audience with an enjoyable and uplifting speech about remaining positive even in very difficult circumstances. His observation on attitudes towards disability were refreshingly honest and from the heart. No jargon, no corporate buzz words and plenty of laughs.” Hertfordshire County Council

“Huge thanks to Chris for hosting a great 'Performance Under Pressure' Wellbeing seminar. Powerful insight into nature of humanity.”  Lloyd’s of London

“Chris Moon will help your team go the extra mile.”

“Inspiring and motivational – ten out of ten.”

“He illustrates perfectly what can be accomplished through determination, tenacity and a positive attitude. We will be more demanding of ourselves in the future.”

“Chris Moon’s session was perfectly targeted, he spent time with meand really listened to what we wanted to achieve.”

“In terms of a process of implementing change, and learning to live with change, I cannot imagine a more compelling presentation than Chris Moon’s.”

“Chris Moon received the highest ratings ever given to an external speaker.”

“When you asked me how I wanted to the audience to feel I replied, ‘inspired’. There is no doubt you achieved this objective, as I’m sure you will do with every audience. You did superbly.”