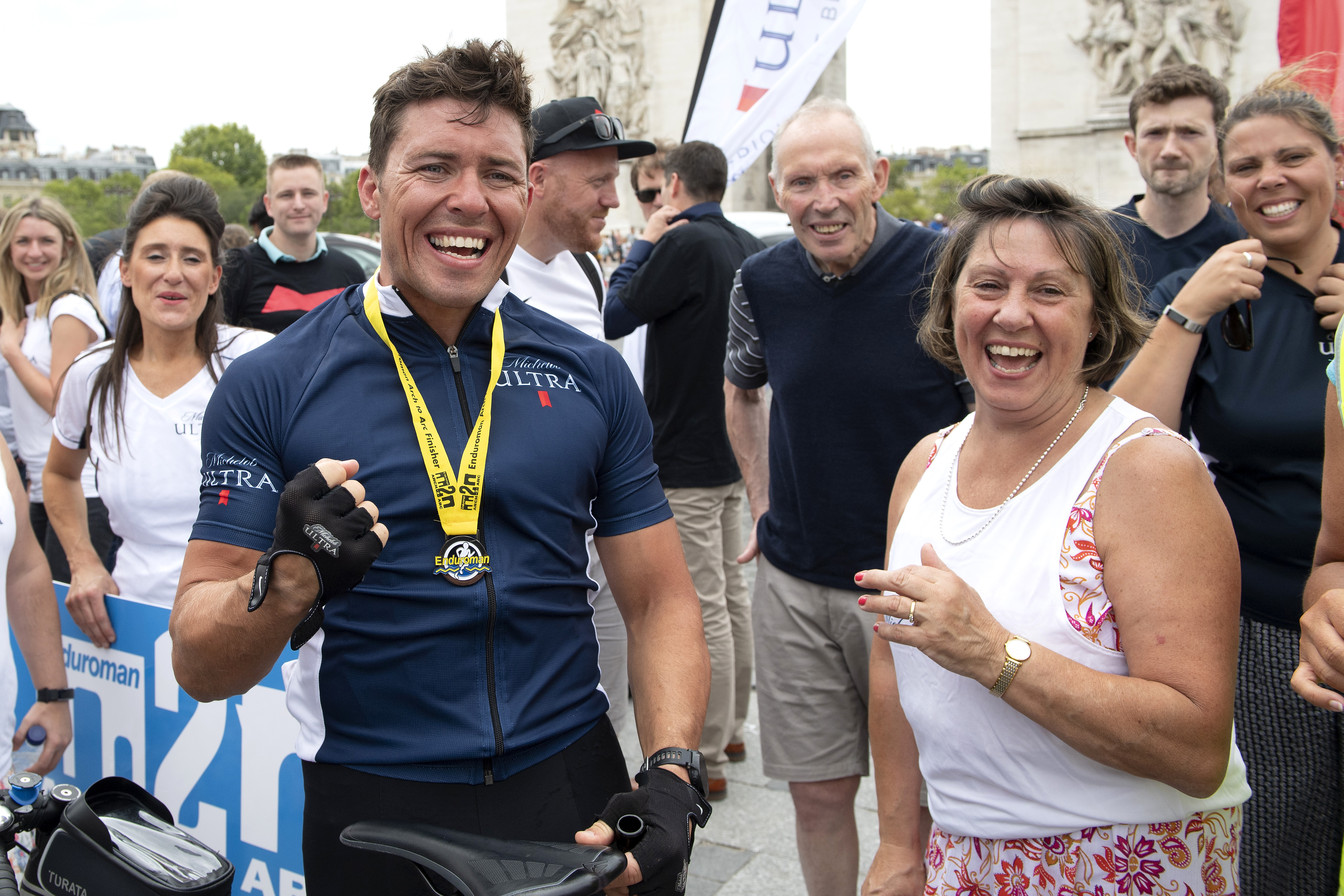 LONDON, ENGLAND - AUGUST 05: Chris Leek, a beer sales manager from Orpington in Kent, is bidding to break a world record by completing a mammoth 289-mile triathlon in under 74 hours, raising £1 million for charity in the process. He is seen here at the start line on August 05, 2019 in London, England. (Photo by Aurelien Meunier/Getty Images for Michelob ULTRA)

The ultimate endurance challenge, that consists of a 87 mile Run from Marble Arch in London to Dover in Kent, followed by a swim across the English Channel, finishing with an 181 mile Cycle from Calais to the Arc de Triomphe in Paris – Chris is the World Record Holder

Christopher Leek is the current World Record Holder for the Enduroman Arch 2 Arc (Non-Wetsuit) Ultra distance triathlon, which is classed as the hardest of its kind in the world.

He is the 41st person to have ever completed this triathlon, and only the 5th person in the World to complete this incredible feat without the use of a wetsuit.

The ultimate endurance challenge, that consists of a 87 mile Run from Marble Arch in London to Dover in Kent, followed by a swim across the English Channel, finishing with an 181 mile Cycle from Calais to the Arc de Triomphe in Paris.

In 2019, Christopher Leek set out to prove that the ordinary man can achieve extraordinary things.  His father Dennis, a long term sufferer of Parkinson’s and Lewy body Dementia, is where his drive comes from.

This amazing 8 month journey cannot fail to inspire. From the ups and down in training, the anxiety and mental pressures, to the start on August 5th 2019 at Marble Arch, London. Christopher shares his stories of the physical and the mental battles that he had to manage and overcome whilst living out his responsibilities both at work, caring for his father and family life.

Since that magical day on August 7th 2019, when Christopher was officially announced as the new World Record Holder having beaten the previous record by 3hrs 50mins, he now shares his story on stage at business conferences, schools, and after dinner events.   The sheer focus, dedication and obsession that drove Christopher to achieve his dreams will inspire all.

“10/10 for Chris, who brought tears to grown men and women (in a good way), really touched a nerve with our colleagues and has already inspired some colleagues to up their exercise levels.  A truly brilliant presentation, thanks Chris.”  HSS

“We couldn’t be prouder of Chris’ gargantuan efforts to raise awareness for these important charities. As soon as we heard about his Enduroman attempt I knew we had to be involved and offer whatever support we could. Chris continually advocates a balanced, healthy lifestyle and is well known for encouraging everyone around the office to be more active” Michelob ULTRA

“We were thrilled to welcome Christopher Leek to open our new School Swimming Pool. During his visit Christopher led an inspiring assembly to over 600 children teaching them the importance of: setting targets, perseverance and self-belief. Everyone listened intently to Christopher who spoke with passion, charisma and the belief in achieving personal goals. The children and staff were so inspired that they instantly went back to class and set motivational targets for the year ahead. Christopher showed the children that anyone can achieve their dreams if they put the effort in and keep their targets in mind.” Avenue Primary Academy

Chris on Sky News after breaking the World Record –