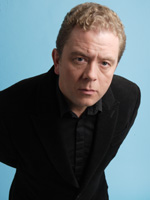 Star of “Dead Ringers”, Jon Culshaw has a catalogue of over 350 impressions and is regarded by many to be the best young impressionist in the UK. He is brilliant for award ceremonies, after-dinner speaking and personal appearances.

Jon Culshaw always creates a great impression. He first proved it as the overall winner, ahead of 8000 entrants on BBC Radio One’s “Talent ’93” featured on Steve Wright In The Afternoon.

The following year Jon joined the team of impressionists on “Spitting Image” where he provided the voices to over 40 characters including Frank Bruno, David Frost, Kenneth Clark, Michael Portillo, Bill Clinton, Mr Motivator, Liam Gallagher and many more.

Jon made international headlines by calling the switchboard of 10 Downing Street and fooling the operators with his ‘William Hague’ impression. Jon then found to his delight that he was talking directly to Prime Minister Tony Blair, live on London’s Capital FM, from 10 Downing Street. The incident was duly reported in Hansard !

Jon’s many TV appearances include – “They Think It’s All Over”, “Never Mind the Buzzcocks”, “Call My Bluff,” “Talking Telephone Numbers,” and “The Big Stage”.

Jon has made numerous radio appearances including a radio series entitled “And This is Them” for BBC Radio 2 via TalkBack, and a third series of “It’s Been A Bad Week” for Celador Productions, a further series is planned for this Autumn.

Jon is part of the much acclaimed award winning radio 4 series “Dead Ringers” which was also made into a television series. The programme won the Broadcasting Press Guild Award for Best Radio Programme 2000, the Sony Gold Radio Academy Award for Best Comedy Show and the British Comedy Awards 2001 Best Radio Comedy.

Within each programme he can be heard providing his highly praised “wind-up” phone calls. In addition to this Jon has been an integral part of the Chris Moyles programme on BBC Radio 1 as the team impressionist and together with Chris, Jon has been asked to address the Students Union at Oxford University.

Jon Culshaw provides all the impressions for the ‘wind up’ phone calls heard on Capital FM’s “Steve Penk Show” some of which have been produced on CD.