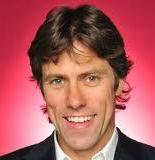 John Bishop performed stand-up comedy for the first time in October 2000, and the following year made it to the final of all the major new act competitions, including So You Think You’re Funny, the Daily Telegraph Open Mic Awards, the BBC New Comedy Awards and the City Life North West Comedian of The Year Award, which he won.

In 2002, he was named best newcomer by BBC Radio Merseyside, and in 2004 he won the North West Comedy Award for best stand-up. In 2009, he appeared as the first act on Michael McIntyre’s Comedy Roadshow in Manchester. That year he appeared at the Edinburgh Fringe Festival where his show Elvis Has Left the Building was nominated for an “Eddie” (Edinburgh Comedy Award).

In 2009 he appeared in Channel 4’s short series Comedy Showcase, and was a contestant on Celebrity Mastermind. He has appeared five times on 5 Live’s Fighting Talk quiz show, claiming four victories on the programme.

His material is drawn from his life’s experiences, including fatherhood; cycling around the world; playing semi-professional football; and working as a nightclub doorman. His first television appearance was on the Channel 4 panel show 8 out of 10 Cats before he appeared on the BBC’s Live at the Apollo which has, arguably, rendered him as more of a noticeable comedian. In December 2009 John started his own TV programme on LFC TV called John Bishop meets…, where he interviews former Liverpool football legends.

In 2010 he was a celebrity guest team captain on What Do Kids Know? along with Rufus Hound, Joe Swash and Sara Cox on Watch. He has also appeared on BBC’s Mock the Week, and Radio 4’s Act Your Age.

Bishop’s debut DVD is scheduled for release on 9 November 2010.
Bishop is currently a regular panelist on the Sky1 show, A League of Their Own, as well as a stand-up/sketch show for BBC One entitled John Bishop’s Britain.

On 11 July 2010, John came runner-up in the second-ever game of ‘How Many Peter Jones’?’ on ITV’s James Corden’s World Cup Live.

He appeared on BBC programme Have I Got News For You and Would I Lie To You? as a guest.