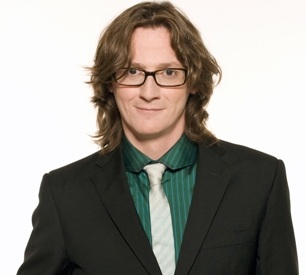 Ed Byrne is one of the UK’s top live acts, and one of the hardest working. As well as sell-out runs in Edinburgh and the West End, he is also firmly established himself on the international circuit. He regularly performs at Montreal’s Just For Laughs and in front of capacity audiences everywhere from Paris to Vegas to Sydney.

Ed’s confident, affable conversational delivery charms audiences. His relaxed style disguises a sharp wit, and a mastery of the barbed comment. Whether railing against pop culture or politics, or observing life as a married man and father, Ed wins the crowd with his gentle-natured rants.

He is a regular guest on Have I Got News For You and Mock the Week, and the US talk show Late Night with Conan O’Brien. He has also starred with Davina McCall in the sitcom Sam’s Game, and presented several programmes for Channel 4 and MTV.

Ed made his theatre debut in Brian McAvera’s Kings of the Road. He has gone on to play a number of other roles in film and television – though to many he is still best known as the voice of Carphone Warehouse commercials.