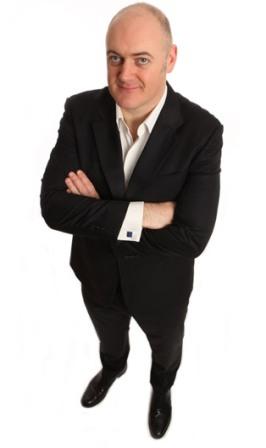 The busiest man in Irish comedy these day

Dara Ó Briain, born 4 February 1972 is an Irish stand-up comedian and television presenter,   He has hosted and appeared on a number of successful panel shows; as well as The Panel and Mock the Week he has featured on Don’t Feed the Gondolas, Have I Got News For You, QI and The Apprentice: You’re Fired!. The Irish Independent described him as “Terry Wogan’s heir apparent as Britain’s ‘favourite Irishman'”. Writing for The Evening Standard, Bruce Dessau noted that “If you don’t laugh at Ó Briain, check your pulse, you must be dead.”

Since January 2006, Dara has taken part in the BBC Three Men in a Boat series, with Rory McGrath and Griff Rhys Jones. The series, broadcast in pairs of episodes around New Year in 2006 and then every year since 2008 have almost consistently brought in 3 million viewers.

Dara was born in 1972, in Bray, County Wicklow, and attended Coláiste Eoin secondary school, a Gaelcholáiste on Dublin’s southside. He attended University College, Dublin  While a student there, he was both the auditor of the Literary and Historical Society (the university’s oldest debating society) and the co-founder and co-editor of The University Observer college newspaper. In 1994, he won the Irish Times National Debating Championship and The Irish Times/Gael Linn National Irish language debating championship; he is fluent in Irish, and only ever speaks in Irish to his father.
After leaving college, Dara began working at RTÉ as a children’s TV presenter. At this time he also began performing his first stand-up gigs on the Irish comedy circuit.  He admitted, “I did the trip from Donegal to Dublin to play to six people; then I turned round and drove home again. I did about three or four years playing to a lot of bad rooms, but learning as I went. It’s not bad when someone gives you £40 for standing up and telling jokes. I remember thinking: ‘This is the life.'” Dara spent three years as a presenter on the bilingual (Irish and English) language children’s programme Echo Island but came to prominence as a team captain on the topical panel show Don’t Feed The Gondolas (1998–2000) hosted by Seán Moncrieff. Dara also hosted RTÉ family entertainment game show It’s A Family Affair.

Dara stand up career internationally took off around this time as he began to tour heavily, performing across Europe, Asia, Australia and North America, with gigs in Dubai, Boston, Adelaide, Shanghai and New York. He was a regular at the Kilkenny Cat Laughs and the Edinburgh Festival, as well as making one notable appearance at the Just For Laughs festival in Montreal in 2002 where he was offered a prestigious gala show because of his performances at the Irish showcase.

Around this time Dara presented the weekend mainstream game show It’s a Family Affair for RTÉ. It was the first time he worked with former Channel 4 commissioning editor Séamus Cassidy. They later set up the production company Happy Endings Productions, and together they produced (and Dara presented) the chat show Buried Alive (2003) and most famously in Ireland The Panel (2003–2006).

On March 12, 2011 Dara set a new Guinness World Records title with Jack Whitehall and Jon Richardson, for hosting the ‘Highest standup comedy gig in the world’, on a British Airways flight in support of Comic Relief.