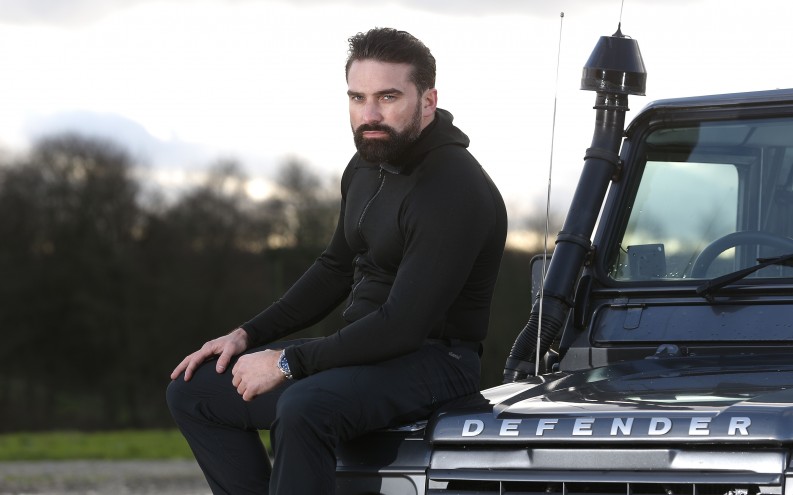 Ant Middleton is the front man for Channel 4’s hit show, SAS : Who Dares Wins and also filled the role of Captain Bligh in Channel 4’s big budget adventure series ‘Mutiny’where team of men, lead by Ant re-live one of the greatest feats of maritime adventure and endurance in naval history. After the legendary Mutiny on the Bounty of 1789, Captain William Bligh and his loyal crewmen were cast adrift in the Pacific Ocean and left for dead. In a remarkable act of seamanship Bligh led his crew to safety across 4000 miles of ocean from Tonga to Timor. Ant and 8 men set out on the same gruelling journey in a replica 23ft open wooden boat, with similar equipment and the same rations of food and water that Bligh’s men had. They used the 225-year-old diary kept by Bligh during the voyage as a survival handbook, to help them uncover the secrets of the seas in such unpredictable, often, brutal environments.

Born in Portsmouth and raised in rural France, Ant set his sights on a career in the armed forces and didn’t stop striving until he achieved his goal.ﾠ He joined the Special Boat Service (SBS) in 2008 and spent 4 years there.ﾠ The SBS is the UK’s naval special forces unit and the sister unit of the SAS.ﾠ He was a point man/lead scout and also a primary fires operator and sniper. Prior to joining the SBS, Ant also served in the Royal Marines and 9 Parachute Squadron Royal Engineers ‘ meaning that he has achieved the ‘Holy Trinity’ of the UK’s Elite Forces (P Company, Commando Course, UK Special Forces Selection)

Thanks to his huge range of Special Forces experience, Ant has invaluable skills in survival and endurance. His appetite for adventure and extremes has no limit and he enjoys nothing more than taking on amazing challenges.

Before SAS : Who Dares Wins, Ant transferred his Special Forces skills to personal security and was selected to protect VIPs, including government officials and high profile celebrities, he also operated as a security expert in South Africa and across various other countries for governments in West Africa. He has trained presidential security teams and also ran extreme SAS style corporate events for large companies who wanted to truly experience the extremes of Special Forces selection.

Ant is a celebrity Ambassador to the RNLI and to The Pilgrim Bandits.

“Ant’s speech was inspirational and refreshing.  We had briefed him on our expectations and he delivered the brief to the word and exactly to the timing – impressive!  His style was superb, informal and very engaging.  He adapted his seamless delivery to the audience and population – perfect!  We would also add that Ant was utterly charming, polite, and 100% professional – a delight to be able to host him!”  Airbus