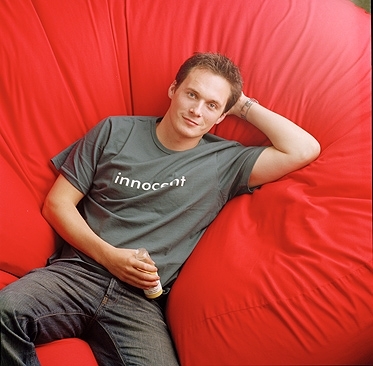 Richard Reed is the co-founder of innocent, the No.1 smoothie brand in Europe. The business was started from a market stall in 1999 by Richard and two friends and has grown into a business with a turnover of over £200m, selling in 15 different countries across Europe. The innocent business is led by a mission to ‘taste good and do good’, and gives ten percent of profits each year to charity. The founders recently sold their controlling stake in innocent to Coca Cola in a deal valuing the business at over half a billion dollars and remain on the board as minority shareholders.
As well as co-founding Innocent, Richard is the co-founder of Jam Jar Investments, a company that backs young entrepreneurs; the co-founder of Art Everywhere, the world’s largest art show; and the co-founder of The Reed Page Foundation, a personal charity that funds peace-brokering and environmental protection initiatives across the world. Richard is also Chairman of the innocent foundation, a Patron of Peace One Day and has at various stages in his career been a non-Executive at the Department of Energy and Climate Change, a director of the human rights charity Videre and a government advisor on entrepreneurship. Richard and innocent’s awards include winning E&Y’s Young Entrepreneur of the Year; Britain’s Greatest Business at ITV’s Great Britons Awards; Most Admired Business Leader by Marketing magazine; National Business Awards’ Small/Medium Business of the Year, and Orange Innovative Company of the Year.

“This is a serious business…Reed has proved that you can create a successful brand without breaking the bank. Innocent has shaken up the branding rules”  Financial Times

“I love this business. You should be proud to work here” Bill Clinton