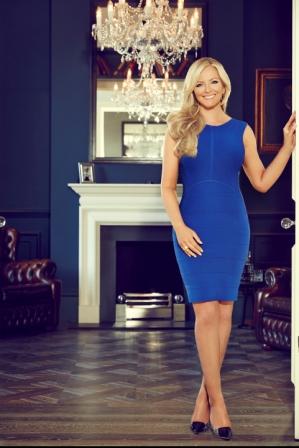 Michelle Mone is the founder and co-owner of MJM International, a multi-million pound lingerie company.

Michelle Mone OBE is the co-owner of Ultimo Brands International and founder of Ultimo, one of the UK’s designer leading lingerie brands. Honoured by the Queen with an OBE for her contribution to business, Michelle is regularly listed as one of the UK’s top female entrepreneurs and has built a hugely successful career on one incredibly simple concept: helping women to look and feel their very best.

Entrepreneurial spirit was prevalent from an early age in Michelle, who grew up in the East End of Glasgow. Michelle left school at 15yrs old with no qualifications to find full-time employment after her father was struck down by an illness leaving him confined to a wheelchair. Following several years working as a model, Michelle secured a job with Labatt Brewers where she quickly climbed the ranks from office junior; at just 22years old Michelle was appointed as Head of Sales and Marketing for Scotland.

However, Michelle’s exciting new career came to an untimely end when she was made redundant at just 24yrs old. Michelle was left devastated and began exploring alternative career options. In 1996 – just six weeks after being made redundant – the idea for Ultimo was born.

Whilst attending a dinner dance, Michelle was wearing a very uncomfortable cleavage-enhancing bra and as a result had a “light-bulb moment”. Michelle decided to invent a bra that was more comfortable, uplifting and cleavage-enhancing than any other bra on the market. Ultimo was launched in November 1996.

Since launching Ultimo Michelle has established herself as one of Scotland’s biggest exports. In 2000 Michelle won the ‘World Young Business Achiever Award’ at the Epcot Centre, Florida, followed by the ‘Business Woman of the Year’ at the Corporate Elite Awards in London.
In 2001 Prince Charles invited Michelle to join the Board of Directors for The Princes Trust and then his Board of Main Council, confirming her status as one of the UK’s leading female entrepreneurs. Michelle also won ‘Best Newcomer’ at the British Apparel Export Awards, presented by HRH the Princess Royal adding to her long list of awards, accolades and recognitions.

In October 2005 Michelle attended a speaking engagement with former US president Bill Clinton and Mikhail Gorbachev, and went on to support the Sultan of Oman in setting up women’s enterprise in the Middle East. Michelle has since become one of the UK’s most notable global speakers, delivering her inspiring speech to audiences around the world.

Over the years Michelle’s empire has gone from strength-to-strength, developing beyond the original umbrella of Ultimo to encompass 15 patented inventions and brands including Ultimo Bridal, Ultimo Swimwear, Ultimo Black Label and joint venture lines including ‘Adore Moi by Ultimo’ for Debenhams. Ultimo is currently available from department stores including Debenhams, Next, Littlewoods, House of Fraser, Harrods and Bentalls, and online from ASOS.com, Figleaves and ultimo.co.uk.

In 2012, after three years of intensive research and over £1million spent on development, Michelle expanded her portfolio and launched into the world of beauty with a range of tanning products. UTan, once of the UK’s bestselling tan products, is available from QVC, Boots and leading department stores.

Over the years Ultimo has worked with a long list of high-profile models and celebrities, including Penny Lancaster, Rachel Hunter, Helena Christensen, Sarah Harding, Mel B, Kelly Brook and Luisana Lopilato. As PR savvy as they come, Michelle has achieved over £1 billion worth of press coverage for Ultimo in the brand’s 15year history.

Over recent years Michelle’s success has soared, as has her public profile; not only was Ultimo the first UK lingerie brand to debut at New York Fashion Week in 2009, but Michelle is also a regular fixture on national television and, most recently, fronted a campaign for British Airways. An expert in diet, health, fashion and business, Michelle also boasts a Twitter following of almost 700,000 people, a figure that is growing daily.

In her private life, Michelle has weathered a challenging few years. She has bounced back from an acrimonious divorce and fought to retain her business, buying her ex-husband out of the company and going it alone. Michelle has since forged a partnership with global lingerie giants MAS Holdings, one of the world’s biggest manufacturers of intimates with a $1.4 billion turnover and 63,000 employees.

Following the recent announcement of a global book deal, Michelle’s autobiography – ‘My Fight to the Top’ – will hit shelves in February 2015.

Can I just say how much I am inspired by your story, thankyou!!!   I come from a really poor background too, we have a lot in common and I too have worked and worked for years in the Lingerie business with the dream of creating my own luxury brand. (I used to sell sausages on a weekend to get me through College!!!)   I got quite emotional tonight as you described times when you nearly gave up and fights with ure hubby. I am so glad you didn’t and I am so happy to see the success you are having now after these many years of work and striving!!!

I had goosebumps as you spoke. In the tough times I will remember what you said about never giving up.     Office Depot

On behalf of the delegates the SFHA would like to thank Michelle for her contribution towards the delivery of an excellent event. Michelle delivered a fantastic start to the conference, with several comments being made by delegates about how inspirational she was. I thought the session was excellent, delivered in a informative and light-hearted, funny manner. This has been one of the most successful Finance Conferences in recent years, with an increased attendance from previous years.
Scottish Federation of Housing Associations

I recently attended the Royal College of Nursing conference where you were speaking to us about challenging our boundaries.
Having attended many a conference with inspirational speakers, my expectation was somewhat low about what a woman who invented a bra could tell me that could inspire me – boy was I wrong.    From the very second you started to tell your story I was hooked. You managed to captivate me and gave an inspiring message about never giving up no matter what your background or where you come from. From speaking to many of my colleagues, they felt the same as me, you were the highlight of the conference.    I just wanted to thank you for coming to speak to us, you truly are an inspiration (and the fact you’re from Scotland just made it all the better)        Royal College of Nursing Event,

Thank you very much for your inspirational and uplifting presentation. It’s great to hear a positive enriching speaker with positive working class outlook and experience. You’re words “the harder you work the luckier you get “ring so true and I will pass these thoughts and your motivating drive onto my student.    You spoke at the Southern Regional College Learning event today and it was both enjoyable and inspiring to hear your story. Behind the quick wit and the evident genius for marketing lie many hours of sheer hard work and commitment to building a business around quality products. This wasn’t just a good story, it was an insight into what it takes to achieve outstanding success. Thank you for being so generous and open about the ups and downs of making your business what it is today.        Southern Regional College

It was a pleasure to hear your story at Destination Growth 2009.  I’m used to hearing professional speakers but you are in a class of your own!  Very touching, humorous and inspirational.  Thank you.      Destination Growth Seminar

Your speech was so heart-felt, honest and motivational and I personally got so much out of it. So did everyone else who attended  – we have had an overwhelming amount of feedback raving about it so thank you very very much !! All the best for the future. I have no doubt whatsoever that Ultimo and MJM International will continue to go from strength to strength.       ICAP

‘Michelle is such an inspirational woman and has helped me to focus on where I want to go and also made me realise that no matter what life throws at you the only person stopping you from getting to where you want to be is yourself.’       The Body Shop