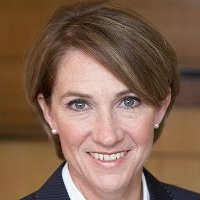 Barbara Cassani has held a number of leadership positions in consumer services throughout her career – from big corporations, to a start-up company, to founding London’s bid to host the 2012 Olympic Games.

Ms Cassani started her career in management consulting then held a variety of strategic and general management roles at British Airways, culminating in the start-up of London-based low cost airline Go. Using £25m in capital, the airline became profitable in less than three years. In 2001, she led a private equity-backed MBO of the business for £110m. Go was sold to competitor easyJet for £374m in 2002. Go was known for its fun brand, low prices, good service, efficient operation and great people – winning the UK’s top travel consumer awards. She was named UK Businesswoman of the Year and co-authored the award-winning book Go: An Airline Adventure.

Barbara established the successful London 2012 Olympic Bid as founding Chairman then Vice-Chairman, hiring the winning team, creating the blueprint for the Games and developing UK public support. She was awarded an honorary CBE (Commander of the British Empire) from the British government.

She has served on a number of corporate and non-profit boards, including Marks & Spencer, hotel group Jurys Inns and airlines Vueling and Air Berlin. Barbara was a trustee of Mount Holyoke College from 1999 – 2004 and currently serves on the leadership group for Princeton University’s Women in Leadership initiative. She is currently acting as an informal mentor to a number of entrepreneurs and speaking on various business topics.

On behalf of the National Housing Federation I’d like to thank you for participating in our Annual Conference last week.  I’m glad to tell you that the event was a huge success and so far the delegate feedback has been extremely positive and largely focusses on the high quality of speakers and programme content.  We appreciate the time and effort you committed to making your session relevant and appealing to the audience.  Once again thank you for speaking at our event and I hope to work with you again in the near future. National Housing Federation