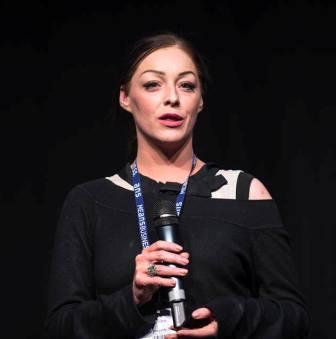 Amy Varle is an incredibly knowledgeable and enthusiastic advocate for homeless people, having been homeless herself as a teenager.

Amy Varle is an incredibly knowledgeable and enthusiastic advocate for homeless people, having been homeless herself as a teenager. At the age of 16, a 10-month stay in a Greater Manchester supported accommodation project for young people had a profound effect on Amy’s life, it was an experience which she believes shaped her destiny.  Dispelling the myth that all homeless people are ‘tramps’ sleeping in cardboard boxes and addicted to alcohol or drugs; she was – like most of the young people living around her – just a teenager from what would be described as a good  home, going through a difficult time.

As she turned 19, Amy began working within a local government housing role, supporting the management of council-owned property, along with practical needs of the most acutely vulnerable people the authority housed. Over the next eight years, Amy successfully worked with a diverse client group, ranging from those with severe mental health issues and learning disabilities, to asylum seekers and children leaving care.

Amy left her council role after 6 years to achieve her dream of becoming self-employed, working independently with the aim of assisting homeless people in her local area.  Spending the next two years conducting practical research across the public, private and voluntary sectors, Amy developed a diverse professional network of both housing and support providers: utilising her contacts to obtain alternative housing options, she made these available, barrier-free, to anyone in need. Exploring highly innovative techniques being used in other parts of the world, Amy began passionately advocating for a ‘Housing First’ led approach towards homelessness in Britain.

In 2016 Amy won a Fellowship from the Winston Churchill Memorial Trust and completed a six-week study tour to the East and West coasts of the USA in order to gather best practice for homelessness resolution. Once home, sponsored by the National Housing Federation, she published an in-depth strategy document, entitled ‘Social Property Investment: Pioneering Strategies for 21st Century Homelessness Prevention and Response’. This has since been delivered by Amy to key policymakers, including the Prime Minister, receiving positive attention from leading homelessness and social justice advocates such as the Big Issue and Amnesty International. In recognition of her social justice advocacy work, in 2018 Amy was awarded the Amnesty International Suffragette Spirit Award, celebrating 100 years of leading female human rights activists around the world.

As Amy explores, develops and promotes new solutions towards homelessness, she continues to work as a researcher and advocate for homeless people; freely sharing her creative knowledge, ideas, strategies and techniques with fellow professionals via her speaking, writing and consultation work. Amy has supported initiatives such as the Manchester Housing Ideas Exchange, Business Rocks Homeless Hackathon and was headhunted by philanthropists Gary Neville and Ryan Giggs to assist with project management of the iconic Manchester ‘Stock Exchange’ Homeless Initiative. Amy has spoken professionally for organisations such as the Queen’s Nursing Institute, ThinkHouse at the House of Lords and Salford University.

To date, Amy has directly provided homelessness solutions to over 100 socially disadvantaged individuals, with the practical application of her studies evidencing governmental savings in excess of £2.5 million to date.

“It was a privilege to meet Amy and hear her passionate speech at the Queens Nursing Institute Homeless Health Conference. Our delegates said they were inspired by Amy's story and her fascinating, informative presentation”  The Queen's Nursing Institute

“Breaking Ground New York are honoured to be involved in an investigative effort that is so detailed and so thoughtful; And, to be associated with someone as committed to helping others as Amy”  Vice President of External Affairs, Breaking Ground, New York City

“Amy is great. Her enthusiasm lights up the winter gloom and she made our lunch when speaking here at the House of Lords. Amy is an inspiration and a reminder why I spend my life the way I do”  The Rt Hon The Lord Young of Graffham CH DL