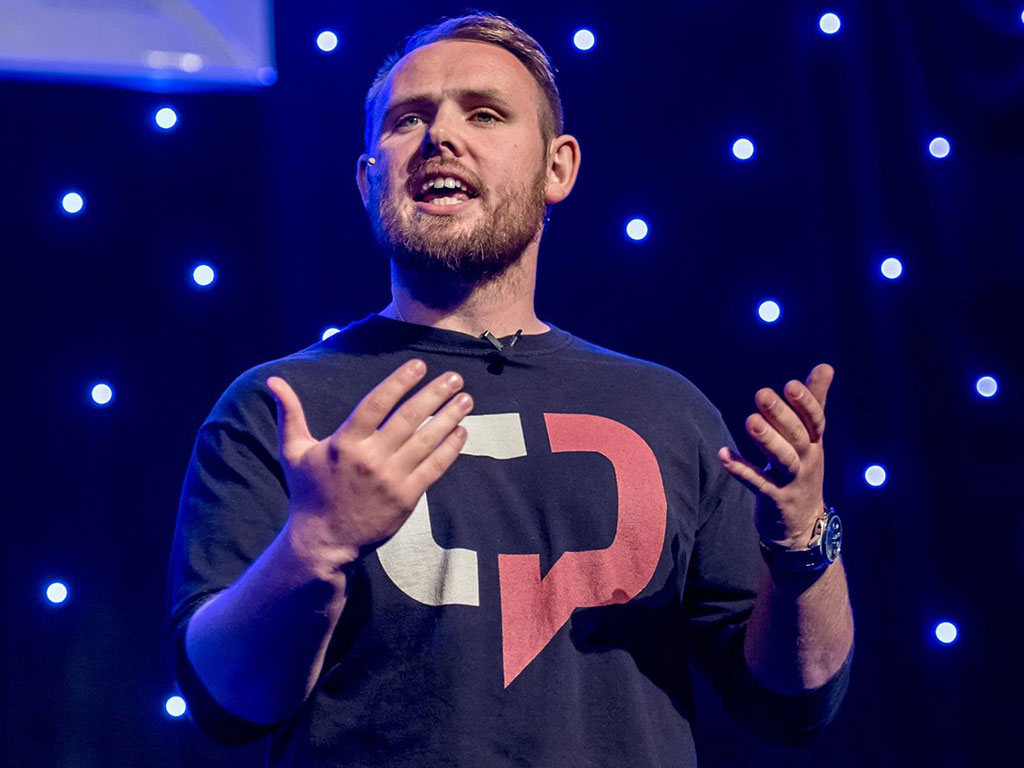 Cameron Parker has been described as an ‘Elite Motivator’..  With speech topics such as ‘Believe the dream’, ‘Hungry for success’, and ‘You don’t value yourself highly enough’

‘The Elite Motivator’ Cameron Parker is renowned for the impact he is having around the UK through delivering powerful motivational and inspirational speeches, he is also Co-founder & CEO of the motivational lifestyle brand ‘Hungry.Under.Dogs’.

Through a difficult childhood and a complicated family situation Cameron was extremely unsure of what he wanted to achieve in life; this mentality resulted in underachieving in school. Cameron admits he didn’t try hard; struggling to understand the importance of education he left school with very few grades. This closed mindset and uncertainty in his life resulted in Cameron mixing with the wrong crowd.   It was also around this time that Cameron lost his Grandmother to cancer; she was very much a mother figure to him, especially as he didn’t have his mother around for his teenage years.

The world was on Cameron’s shoulders; the future wasn’t looking bright or overly pleasant.   He knew that if he continued along this path the outcome could have been frightening.

However a slow shift occurred when Cameron started playing American football, utilizing sport as a way to release anger and having fun. He started to develop a dream that he wanted to turn his education around and play American Football in an American college.  Cameron understood his dream to many people seemed unrealistic; and it would take years and years of hard work to achieve it. However he didn’t want to have any regrets; even if he fell short, he would still be in a better position than he was two years previous. In his eyes he had nothing to lose; he just knew one thing, he didn’t want to go back doing what he was doing.

Hours and hours of working towards his dream; Cameron sacrificed everything in those 2 years, only to fall short of his goal. What felt like a huge blow; it has been described as a blessing in disguise because the characteristics he developed in those 2 years still support him on his journey today.

Despite the huge setback; Cameron achieved the highest grade available to him in college, helping him progress onto University, becoming the first person in his family to earn a degree whilst battling with Dyslexia and ADD.  As a bonus he also made it on to the Great Britain Lions team, playing teams such as Netherlands, Czech Republic and Serbia.

Cameron is now inspiring over 100,000 people every year through Schools, Universities and Corporate. Coverings topics such as: ‘Achieving Goals’, ‘Mental Health’, ‘Aspirations’ and ‘Motivation’. Cameron will continue to provide a positive impact in people’s lives, especially as the value and impact of the speeches is second to none.

“I loved your speech you delivered to my year today, I honestly have so much respect for what you do and I found you so inspirational, thanks to you I was calm for my interview last lesson because your words were so powerful and you are deffo the BEST motivational speaker”  A Cumbrian School

“I just want to say I’m from Calder and that speech you did was amazing, it has really made me think about my future.  Thank you so much.”  A Cumbrian School

“Your speech at my school yesterday was so inspirational it really opened my eyes and made me think about my future.  You made the whole of year 11 laugh which took our minds off the interviews and stressful exams coming up, you are truly admirable and someone to look up to.  Thank you”  A Cumbrian School

“The story you told us was amazing.  Heart braking but it’s amazing how far you’ve come even if you didn’t pass your GCSE’s it’s letting us (me) know that I can do anything.”  A Cumbrian School

“Our Y9 and Y10 students attended an inspirational assembly today with Cameron Parker. An amazing story with a powerful message. Thank you for your visit.” Morton Academy

“His engagement and enthusiasm has an immediate impact upon children and young people and it has been a pleasure working with him again this term. Cameron talks about his journey in a story fashion which appeals to the audience and staff alike. His motivation is infectious, with his ability to talk to groups of any size.”  Bristol Metropolitan Academy

Cameron was a huge success. The students loved him and are full of praise. The staff who went to the event also spoke very highly of him and how inspirational he was. We are hoping to include him in next year’s event. Thank you. Winterhill School

“The words of a year 10 student were ‘he’s a legend!’ Cameron has the ability to relate to young people in a way that immediately makes them feel listened to and respected. He has such empathy with young people and his enthusiasm and passion is infectious. The message he brings is inspirational and his story is one they can relate to themselves.”  Oasis academy

“Within minutes Cameron had the entire cohort, up and out of their seats and had them thoroughly engaged for over an hour. By the end of the session Cameron received a standing ovation, and he had a considerable number of students stay behind afterwards to speak and have pictures with him. We will definitely book Cameron again.”  Winterbourne International Academy

“You can tell the success of a speaker within 5 minutes. This reduces to the first 1 minute when the audience are young people. They either get the students attention or they don’t. Of those that manage to capture their attention, few manage to keep it, especially for 60 minutes. Cameron achieved both.” Community Academy

“Cameron speaks their language and can communicate exquisitely in a way that compels the listener to personally apply lessons from his life to their own context. As a young speaker Cameron brings a clarity of thought rarely seen and I highly recommend him.” Bath Community Academy