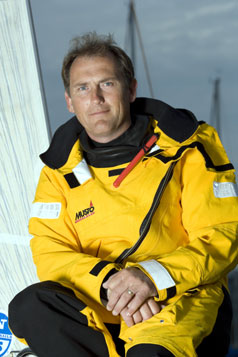 Pete Goss came to wider public attention because of his heroic seamanship – in a competitive race he turned around to rescue a rival. Renown as an inspirational skipper, at his speaking engagements, Pete focuses on the necessary skills, self-belief and determination needed to win. He is able to powerfully pinpoint the important lessons for businesses of Effective Leadership, Communication, Trust, Empowerment, Teamwork and Loyalty needed for success.

Pete came to the world’s attention in December 1996 when sailing ‘Aqua Quorum’ the smallest boat in the world’s toughest yacht race –‘ The Vendee Single Handed Round the World Race’ – when he dramatically turned around and rescued a French yachtsman and fellow rival Raphael Dinelli from they stricken vessel. The rescue succeeded against all the odds and in recognition Pete received France’s highest award the Legion d’honneur and the UK’s HMS Hurricane Trophy for his heroism and outstanding seamanship. His single-minded determination and competitiveness during the race was evident later on when he had to operate on himself to repair ruptured muscles around his left elbow, after which he joked, ‘Now I’m a true single-handed sailor’.

Even with these setbacks, Pete became the fastest Briton to sail around the world on his own in just 126 days and 21 hours. United by their adversity at sea, Dinelli asked Pete Goss to be his best man at his wedding! The two have since forged a special relationship and they competed together as co-skippers in the Transatlantic Jacques Vabre Race in 1997. Pete Goss excels in passing on his exceptional leadership and training skills to get the very best out of people. He has spoken at senior management forums, conferences and seminars, where people discover Pete’s secrets for success as one of the world’s most experienced and competitive sailors.

Pete was appointed the first Training Skipper for the ‘BT Global Challenge’ – a round the world race which goes the ‘wrong way’ against all prevailing tides, winds and currents. The criteria for the race was to construct 10 identical boats all to be crewed by novice sailors who had very limited or no sailing experience whatsoever. Pete whittled down the applicants for the race to 120, and then set about the task of training them in the necessary skills to withstand the rigorous demands and perilous conditions of ocean sailing. Rising at dawn and working with the volunteers until late at night, Pete got the crews fit and focused on working together in teams so that they understood every aspect of each boat’s rigging and their role in its operation. Pete demonstrated his ability to motivate and instil enthusiasm in the crews, and his unwavering attention to detail in the planning, preparation and safety of the trip played a major part in the overall success of the race.

Pete’s early career began in the Royal Marines where he spent seven years as an instructor with the Joint Services Sailing Centre. Pete came 1st in the monohull class in the Three Peaks Race in 1984. In 1986 he was 2nd in his class in the Two-handed Transatlantic Race. In 1988 he finished second in the Carlsberg Single-handed Transatlantic Race sailing ‘Cornish Meadow’, a 26ft catamaran. This set the record for the smallest catamaran to sail the North Atlantic from East to West for which he was awarded the Sir Alec Rose Trophy for the most outstanding single-handed achievement. In 1989 he won his class in the Round Britain and Ireland Race sailing a standard production Beneteau, for which their Royal Naval Sailing Association gave him a special award for his exemplary seamanship.

Pete was simply one of the most inspirational speakers we’ve ever had, and his messages about the importance of teamwork and innovation were very relevant for our business. He’s a great story teller, and an incredibly humble and likeable guy. The feedback from our event was overwhelmingly positive about him and his message, so I’d strongly recommend him.”      BT Retail

“We found Pete to be one of the nicest, most inspirational, enlightening and empowering speakers many of the audience had ever heard.”    Devon Local Medical Committees

“The talk is still being discussed in corridors and over lunch both internally and with clients…a most enjoyable, stimulating and inspiring evening.”     Business Link

“Pete’s presentation was absolutely first class, mixed with a sense of life experiences, challenges and real business issues that he has overcome during his obviously challenging career.”       Avaya UK & Ireland