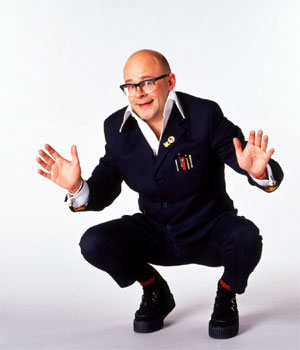 Harry Hill’s own brand of stand-up comedy has won numerous awards including the Perrier Award (Edinburgh Festival) and the winner of a BAFTA nomination for ‘Best Light Entertainment Show’ (1998). Following successes on tour, radio, video and television, Harry now has his own television show.

At the 1992 Edinburgh Festival, following the enormous success of his show ‘Flies’, Harry was awarded The Perrier Award for Best Newcomer. (The award was created specially for him.)

The following year, ‘Eggs’ sold out at The Edinburgh Festival. In one year, 1994, Harry was awarded ‘The Independent On Sunday Best Comedy Award’, ‘The City Life Best Comedy Award’ and ‘The Time Out Comedy Award’. His ‘Harry Hill’s Fruit Fancies’ a series of six, ten-minute black & white films, were broadcast on BBC 2.

Written by and starring Harry, the films were shot on Super 8mm and featured a supporting cast of comics from London’s cabaret circuit. That year also saw Harry pick up ‘The Perrier Award’ at The Edinburgh Festival for his highly acclaimed show ‘Pub International’.

In 1995, Harry was nominated for two awards at the prestigious British Comedy Awards – ‘Best New Television Performer’ for ‘Fruit Fancies’ and Best Radio Series. His hit Edinburgh Show ‘Savolon2000’ toured the UK, selling out all 40 dates. In October Harry’s Fruit Fancies were released on BBC Video, and in the first week they went straight into the All Video Chart Top 10.

In 1996, British television audiences were introduced to Harry Hill’s own style of stand-up when he starred in ITV’s Saturday Live. Harry also made comedy history when he became the first British comedian to perform on The Late Show With Letterman – one of the USA’s highest rated entertainment shows. Following his success, he received an open invitation to return.

Harry continues to entertain and amuse on British television with his award winning show “Harry Hill’s TV Burp” on ITV.