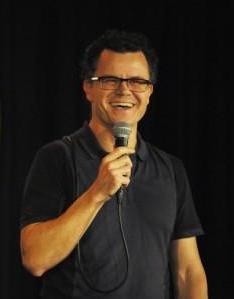 Winner of the Perrier Best Newcomer Award in 1993 followed by a Perrier Nomination at the 1996 Fringe.

Since becoming a professional comedian Dominic has performed three highly acclaimed sell out one-man shows at the Edinburgh Festival, winning the Perrier Best Newcomer Award in 1993 followed by a Perrier Nomination at the 1996 Fringe.

Dominic’s material is what sets him apart, inoffensive and totally accessible to all, relying heavily on acute observations on all our lives. His material, combined with a very personable stage presence, always make his shows relaxing, intimate and hugely enjoyable.

Dominic has been described by The Guardian as “A comedian who makes you feel glad to be alive”. He is now one of the country’s most respected comedians, playing regularly at The Comedy Store and Jongleurs and performing full length at theatres all over the country.

The Small World of Dominic Holland show for BBC Radio 4 broadcast in August 2000, was named as one of the station’s listeners most popular comedy shows. His acting credits include Young Persons’ Guide to Becoming a Rock Star and the film Tube Tales.

His novel, Only In America, was published in May 2002 to excellent reviews, “hilarious modern day fairytale from a sensational new voice in contemporary fiction”, Amazon.

In addition, Dominic has made a number of guest appearances on such shows as “Have I got News For You”, “The Clive James Show”, “The Brian Conley Show”, “The Des O’Connor Show”, BBC 1’s “The Stand Up Show” and Edinburgh Nights, BBC2, “Best of Edinburgh ‘99”. His acting credits include “Young Person’s Guide to Becoming a Rock Star” and the film “Tube Tales”. He has also appeared on “Never Mind The Buzzcocks”, “Bring Me The Head of Light Entertainment” and “That’s So Graham Norton”.