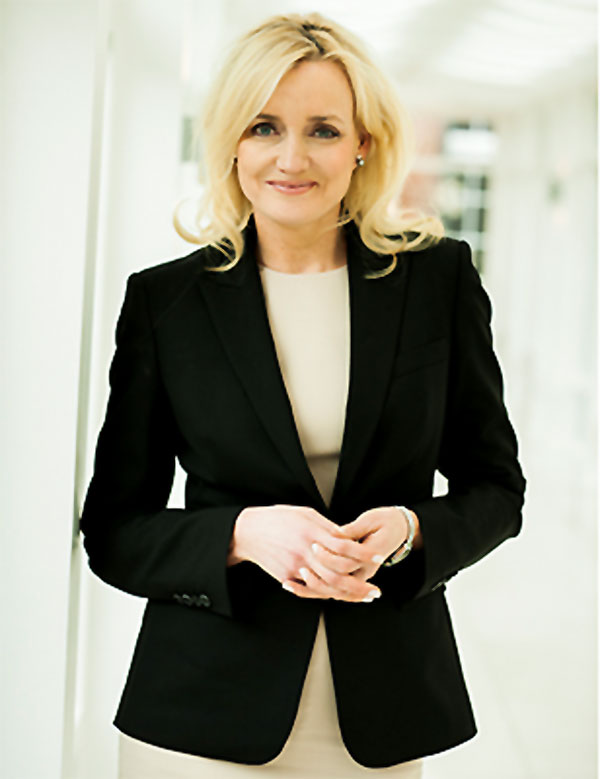 Julie Meyer is one of the leading champions for entrepreneurship in Europe.  Through her intertwining roles of entrepreneur, advisor, investor and industry commentator, Julie has set her mission to build a growth story for the UK and Europe.

Julie Meyer is a leading investor and entrepreneur in digital, high-growth, early stage businesses around the world.  She has driven many continent-wide initiatives for creating wealth and growth in the European economy.  Julie believes that ‘Individual Capitalism’ is the force of the 21st century.  She trusts people’s ingenuity to solve the world’s problems at both the macro and micro levels – and to expand prosperity.
In 1998 Julie founded First Tuesday, the network of entrepreneurs which many credit for igniting the internet generation in Europe.  It was sold in July 2000 for $50 million in cash and shares.

Julie has been awarded an MBE (Member of the British Empire) by the British Government for Services to Entrepreneurship.  She has been named one of INSEAD’s Top 50 Alumni, Ernst & Young Entrepreneur of the Year, World Economic Forum Global Leader of Tomorrow, one of the TIME Magazine Digital 50, one of WIRED’s 100, one of London’s 1000 Most Influential People 2010 & 2011 (Evening Standard) and one of the Top 30 Most Influential Women in Europe by the Wall Street Journal, Europe.

Julie is on the Board of Directors of Vestergaard Frandsen, a for-profit humanitarian development firm, and INSEAD, her former business school, as well as Medikidz, a business which educates children about health problems through child-friendly media.

Click on the link below to see Julie being interviewed on the subject of why Entrepreneurship is so important:
http://video.ft.com/v/791636608001/Why-entrepreneurship-is-so-important

Daily Telegraph – Julie Meyer: An entrepreneur’s will to succeed
http://www.telegraph.co.uk/finance/financevideo/8432556/Julie-Meyer-An-entrepreneurs-will-to-succeed.html

The Apprentice You are Fired – Episode 4
http://www.bbc.co.uk/iplayer/episode/b00vn2cw/The_Apprentice_Youre_Fired_Series_6_Episode_4/

“Julie’s book [Welcome to Entrepreneur Country] has changed so much of the way I think about things…thank YOU…..your citation 'think big, start small, act fast' on the back of your book is what I've realised defines the 30% Club journey – I didn't appreciate that at the time, but now it all makes sense that's how things have 'happened' with that project, way exceeding other ventures I've been involved with.”  Helena Morrisey, CEO of Newton Asset Management

“You have the power to transform.”  Christina Domecq – CEO, SpinVox

“For too long, we British have been a bit sniffy about entrepreneurialism, regarding individual capitalism as something rather vulgar. Well, personal enterprise and innovation among small companies is the only dynamic that will propel us into a prosperous future. Whether at First Tuesday, Ariadne Capital or through Entrepreneur Country, Julie Meyer has long been a charismatic champion of entrepreneurialism in Britain. She’s shown us the way through her own endeavours and by broadcasting the achievements of others. Julie knows – Britain’s got entrepreneurial talent. She’s a superstar.”  Matthew Rock – Co-founder & Communications Director, Caspian Publishing

“I just wanted to thank you for your time, energy and intellect last night. You pitched perfectly providing inspirational words without ever patronising. We have received many complimentary emails today and that’s down to your significant contribution. I thoroughly enjoyed dinner and enjoyed your company immensely.” Steven Smith – Digital Industry Director, Liverpool Vision

“I just wanted to thank you on behalf of the TiE President, Charter Members, general members and guests for speaking on Monday evening. We have had fantastic response to your talk – everyone found it fascinating to hear the real people behind the ‘VC’ tag which sends shivers down most people’s backs. I think most people are quite daunted with the thought of approaching one!”  Jean Drinkwater – The Indus Entrepreneurs (TiE) Manchester

“On behalf of Crimson, I wanted to thank you so much for your contribution to the Startups Awards – not only as a judge but as an award presenter on the afternoon. All the winners’ interviews show you what your judging decisions meant to the winners. Quite touching! We were delighted that you could take part and hope you enjoyed the afternoon. Looking forward to hopefully involving you in our events in the future.” Heather Olhausen – Events Manager, Crimson Business

“It was refreshing to see someone with so much passion and belief in what they do. Have a great day and don't forget to relax occasionally, stay positive.” Andrew Britton – Finance Director, W R Evans

“The cofounder of FirstTuesday is bringing the spirit of American venture capitalism to Europe's new breed of Internet startups.”   Forbes

“Thank you so much for your speech and attendance at our Women in Structured Finance event yesterday. I have received so many fantastic comments for the people who attended -“inspirational”, “uplifting”, “simply brilliant” are just a few.”  Mia Drennan – Managing Director, SquareMile Connections

“We are most grateful for to you for sparing your time to participate in the conference and for giving such an interesting and thought provoking address.”  Mark Gough – Head of Editorial, Financial Times

“I found Julie Meyer to be a particularly inspiring speaker and it was a great experience to see someone obviously [at] the very top levels, yet still being able to find the time to come along and encourage the rest of us at the workshop.”  Delegate – Equalitech: Advancing Women in ITEC

“I wanted to thank you for your keynote speech today. While the content was both timely and full of relevant material I was struck by what an excellent public speaker you are and how you captured and held the audience’s attention (Including my own). It's not often that a speaker truly causes the audience to think and reflect. Usually it is a self aggrandizing diatribe or even worse someone preaching and pontificating to their own goals. You talk was refreshing.”  Cam Edgar – Vice President Business Development & Sales, One Power

“Just a short note to say how much I enjoyed your presentation at the IRX in Birmingham this week, I found it very compelling, relevant and a great source of inspiration… Really, Really, Really Good! Thank you.”  John Taylor – Global Brand & European Marketing Director, ThinkSmart

“Julie, you were sensational – I was absolutely riveted by everything you said. I cannot tell you how much I appreciate your having given us your time like that.” Julia Hobsbawm – Chief Executive, Editorial Intelligence

“The panel session was inspiring and encouraged us all to stretch our thinking. Your comments around entrepreneurship, your personal journey and how you make it work resonated with the audience and from the feedback we received during the event, they really connected with you. I think this connection is highlighted by the huge number of questions our audience texted in during the panel session! You achieved our goal of inspiring our audience, both professionally and personally and for that, we are truly grateful to you.”  Heike Nott, Deutsche Bank

Elevator Pitch: Julie Meyer of Ariadne Capital on how to crush it in Europe

Palo Alto native Julie Meyer headed off to Paris after finishing college in the late 1980s, intent on learning the language. She got a job teaching English to French executives who worked for Silicon Valley stalwarts like Hewlett Packard and 3Com. Today, Meyer is one of the most influential venture capitalists in Europe.

Her Ariadne Capital — named for the mythical princess who helped a hero navigate the labyrinth — was one of the first to back Skype. Meyer also is co-host of a popular Shark Tank-style program called Dragon’s Den, which appears on the BBC’s website. During a recent visit home to the Bay Area, she spoke with Elevator Pitch about the differences between the valley and Europe’s burgeoning tech scene.

Q: HOW’D YOU GET INTO THIS RACKET?

A: I spent 1990-2000 building First Tuesday, a pan-European network for entrepreneurs that eventually sold for $50 million. I would hear from every corner that European venture capital, as an asset class, doesn’t work. I got sick of hearing that old refrain and decided to do something about it.

Europe has excellent entrepreneurs, but they are let down by the poor quality of financing. The Sand Hill Road of Europe is most definitely not built yet.

A: Redesigning it. We pioneered the entrepreneurs-backing-entrepreneurs model in Europe; our founding shareholders include the founders of companies like Hotmail, BetFair and WorldPay. We’ve continued to build a crowd of entrepreneurs who co-invest with us, from board directors of Amazon to the CEO of multi-billion pound semiconductor firms.

We operate on a radically different premise than other venture capital funds: That the entrepreneur is our client. It’s about him or her, not us. Entrepreneurs seek us out because we’ve been in the burning building of a startup ourselves. And unlike many venture capitalists in Europe, we have our own money at stake.

Q: WHAT KINDS OF PITCHES ARE YOU LOOKING FOR NOW?

A: We are focusing on fintech right now, as an entirely new system is emerging out of the financial crisis. There are opportunities in infrastructure for bitcoin or other digital currencies, as well as many types of payments, digital identity, crowdfunding platforms and applications that banks will either adopt or buy.

A: There are many I’ve seen in the 15 years I’ve been doing this. These are some that can be deadly:

· Making all your friends co-founders with founding equity, when only two of you are doing the work. Once you’ve given the founding equity away, you can’t get it back.

· Not reading the investment documents thoroughly. I once had to break the bad news to a (not stupid) guy who hadn’t realized when he signed with his Series A investors that if he missed some milestones, a massive amount of his firm was going to be transferred to the venture capitalists.

· Outsourcing the development of the product to an agency of some sort. If the product is not built in-house, don’t invest.

· In Europe in particular, marketing is not as strong as in the US for tech start-ups. There’s much more of a feeling that the technology is going to carry the day, but marketing trumps tech again and again.

· Not making rational decisions about when to sell. I’ve seen a lot of entrepreneurs still hankering for the big number that they should have sold for years earlier.

Q: WHAT’S THE NEXT BIG THING GOING TO BE?

A: Vertically integrated hardware and software combinations. Nest, the so-called thermostat company, is one. They had to deal with the guts of houses and pipes as well as customer design issues and user behavior.

Once upon a time the world was PC-centric, and the Windows-Intel alliance ruled the platform. Fast forward to the Consumer Electronics Show in January, and I saw platforms everywhere — the car, the home, the person. Elsewhere, the ship, the airplane, the train are all becoming platforms as well. To catch up, these industries are looking for entrepreneurs who are taking a system-level approach to the total customer experience.

Infrastructure is a tough place to be; whether telephone companies, hospitals, schools or airlines, they get regulated, must pay tax. That’s why the technology platform companies are winning — the iPhone is in ascendancy, not Vodafone or Telefonica.

Volkswagen or General Motors could have created Tesla, but they didn’t. They didn’t reimagine their industries as ecosystems, so an entrepreneur did. Goliath rests on his laurels, doesn’t anticipate change, and that gives the David the opportunity.

Q: HOW WOULD YOU DESCRIBE THE STARTUP CULTURE IN EUROPE VS. THE VALLEY’S?

A: Europe is being redefined by its entrepreneurs right now. There are just as many subversive, crazy, want-to-change-the-world entrepreneurs there; the difference is that many of the buyers of tech firms are in the U.S., and NASDAQ is still considered the dominant place to go public.