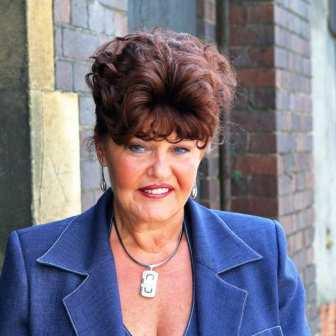 Award winning Entrepreneur Hilary Devey is the Inspirational Founder, Chief Executive and Chairman of The Pall-Ex Group. An outstanding role model for female entrepreneurs she has driven her company to a market leading position and now leads an operation which boasts a multi-million pound turnover.

Hilary Devey gained her wealth of experience in the distribution sector, having worked at Littlewood’s, followed by Tibbett and Britten, and Scorpio (part of the United Carrier network). She then spent seven years in the retail distribution sector at TNT before leaving to set up her own business.

Prior to the formation of Pall-Ex it was difficult to transport small consignments of palletised freight quickly and cost-effectively. Hilary knew that this situation needed addressing urgently and she is responsible for revolutionising distribution in this country by developing a business model that would overcome this.

During this time she had to tackle incredible odds and face untold hardships. Bankers refused to back her proposed venture and she was forced to sell her house, and downgrade her car to fund its start up.

She faced these difficult decisions with true entrepreneurial spirit.  A very difficult decision for anyone let alone a single mother, she tackled them head on.  Many would have given up but Hilary persisted, knowing that her idea simply had to work.  For instance in the first year of trading, employees wages came before her own and that Christmas couldn’t even cover a cost of a Christmas dinner for her and her son.

Massive obstacles lay ahead but Hilary managed to overcome every one of them.  After months of abortive attempts, Hilary managed to source her first premises and eventually, on 29 November 1996, Pall-Ex was born. On the first night of operation just 117 pallets were distributed through the fledgling network – a stark contrast to the 10,000 pallets that are now regularly distributed by Pall-Ex nightly.

Today, as Chief Executive of the UK’s No. 1 palletised freight distribution network, Hilary is an inspirational role model for both male and female entrepreneurs. Having started from nothing, she now leads a network which boasts a combined turnover approaching £100m and serves numerous blue chip customers. Pall-Ex makes daily deliveries to every UK postcode as well as operating a scheduled daily service to 38 European countries.

Both Hilary and her company can boast an impressive array of firsts within the logistics sector – they are innovators, not followers as evidenced by innumerable award accolades.  Hilary campaigns tirelessly for various charities including The Princess Royal Trust for Carers for whom she became a patron in 2007 and she became a patron of The Stroke Association in 2010.

Hilary has also been recognised for her contribution to business in Leicestershire with an honorary degree from the University of Leicester.